Weekly poll results: the Redmi Note 11 Pro 5G is the only popular member of the new series

We have a winner – the Redmi Note 11 Pro 5G was by far the most popular model of the new series in last week’s poll. In fact, it may be the only one worth having as neither the poll results nor the comments were particularly kind to the other three.

With over a third of the vote going its way, the Note 11 Pro 5G will do okay with fans. Last year’s 5G Note was a bit of an odd duck – the cost of 5G was paid with downgrades to other components and that wasn’t particularly popular with voters. This year the 5G model is clearly the top device.

Its 4G sibling, the Redmi Note 11 Pro is looking like a dud – many commenters said that they would rather have the Redmi Note 10 Pro, even though it’s a year old. The new model just doesn’t offer much in terms of upgrades and actually comes with some downgrades (nagging issues like losing the dedicated microSD spot and switching to a hybrid slot instead).

It’s telling that the third most popular option in the poll was a look back at the Note 10 series. Like the 4G Pro, the vanilla Redmi Note 11 took a beating. If the Chinese version of the phone can have a Dimensity 810 chip with newer CPU cores and 5G, why not this one? And then there’s the Redmi Note 11S, which ended up on the bottom. The upgrade to a 108 MP main camera didn’t resonate with fans and the new S doesn’t have much else to show for its $20 price hike over the 10S. 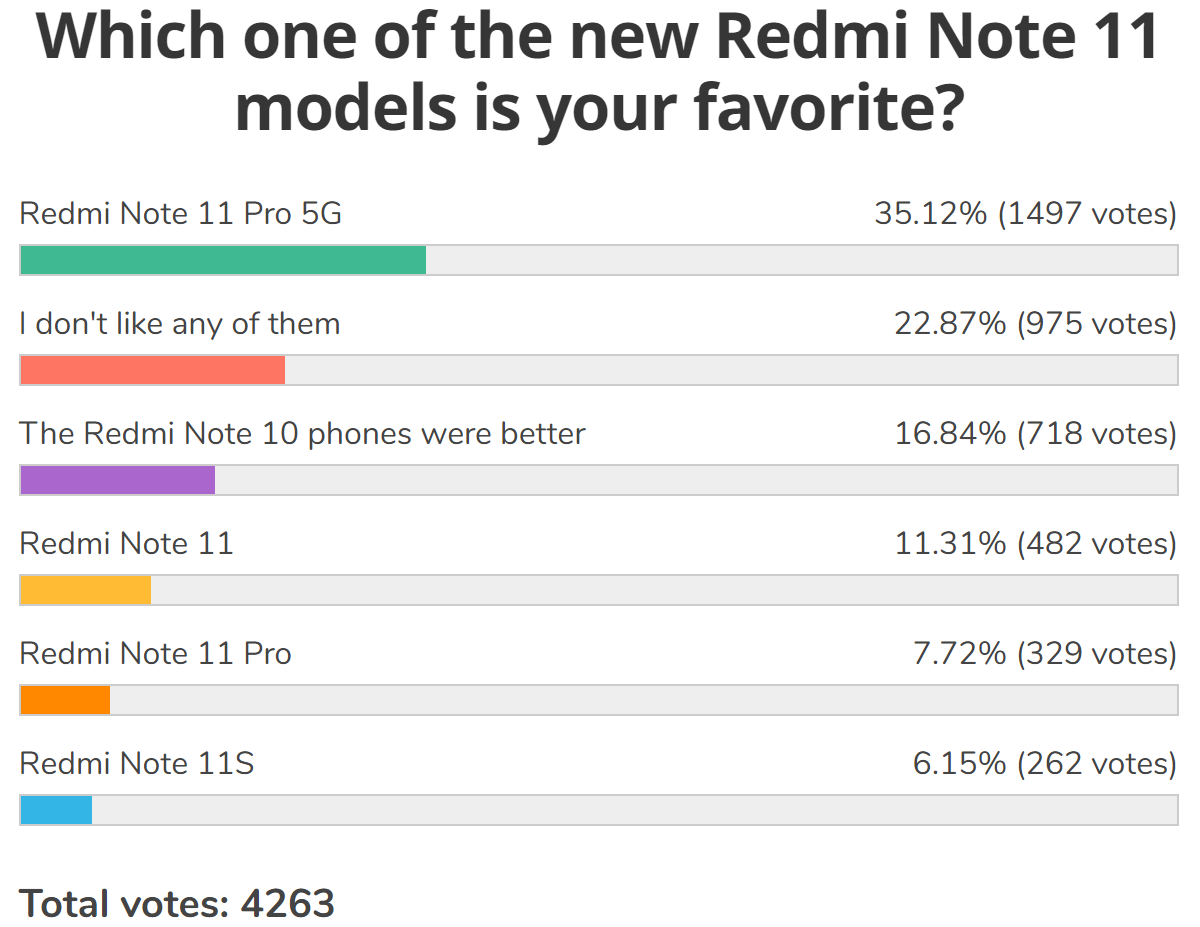 The Redmi Note series has been extremely popular, reaching 140 million sales in late 2020, then 200 million in mid-2021 and 240 million before the year was over. It looks like only one of the four 11-series models will have a major contribution to the sales numbers, however.

Weekly poll: which one of the new Redmi Note 11 models is your favorite?

Agreed. Remember the killer bang for your buck Note 4 back in the day and how cheap it was? Remember the revolutionary K20 Pro? The beast CC9 aka Note 10 (the first)? What happened here... But still, we do get some sweet deals out of these many mod...

Dude, this is not the golden age of Xiaomi anymore. Xiaomi now is not what I used to know.