The Xiaomi Mi Mix 3 is nearly universally adored – with an 87% positive vote in last week’s poll, the phone is shaping up to be one of the more influential flagships of the second half of 2018.

With the holiday season fast approaching – 11.11 is next week, Christmas shopping is a month and a half away – the latest edition to the Mix series will surely help Xiaomi bolster its sales numbers. The company moved 100 million phones in 10 months, achieving the goal it set for itself for this year.

An almost unique design (the Honor Magic 2 was just unveiled), competitive pricing and a rich retail package make the Mi Mix 3 a great contender. The bundled 10W wireless charger is a nice perk, but some people did complain about the battery capacity – 3,200mAh is on the low side for a phone of this size.

Another concern in the comments was the durability of the phone – how long will that ribbon cable hold? The company has tested the phone to 300,000 open/close cycles, but still it would be nice to have a Xiaomi service center nearby. Which is why it’s good to see new stores popping up.

And, finally, one more thing – people still think that the bezels could be thinner. We’d say that it’s impractical to make the side bezels smaller (even with good palm rejection), but the top and bottom bezels are fair game. 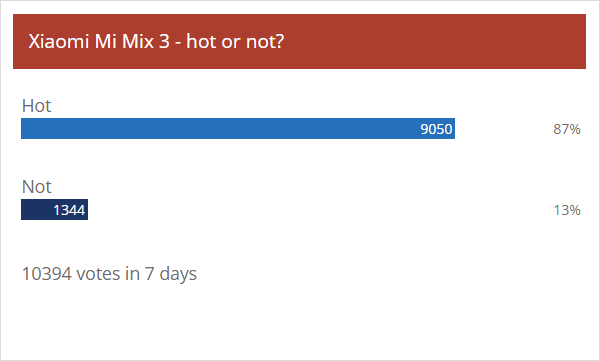 Weekly poll results: the Razer Phone 2 gets some love, but will have to fight for the win

Weekly poll results: the LG V40 ThinQ gets more love than the G7

I’m sure if you ever use real high end like samsung oneplus iphone, and ever use miui device, u won’t choose yes, because the rom is really bad, laggy, ram hungry, resource hungry, even you use 20gb ram on miui device it still lag bad, problem is not...