It's been one year since Xiaomi set shop in the Indian market, and since then the company has seen a tremendous response from Indian consumers, propelling the company to the fifth spot in terms of overall market share in the country. Xiaomi now has a 35 member team set up in Bangalore and a wide range of products available on its own Mi.com and other retailers such as Flipkart, Amazon, Snapdeal, The Mobile Store, and Airtel. 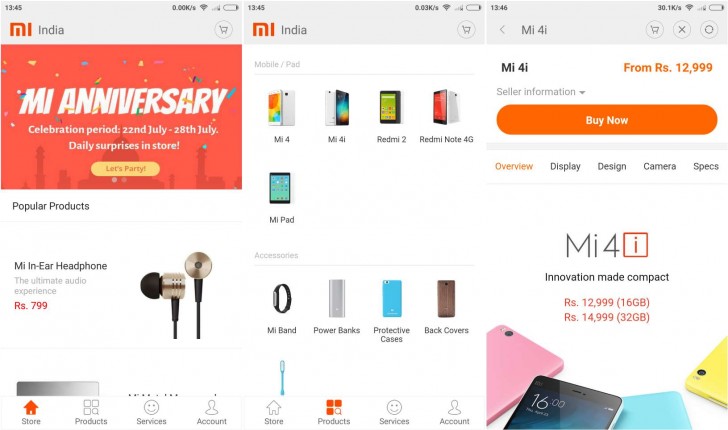 To celebrate the one year anniversary, Xiaomi has announced the 32GB variant of the Mi 4i, which was globally announced in India earlier this year, in a new Dark Gray color, which you can read about here.

Other than that, the company is also launching a new Mi Store app on Android where people can purchase the company's products in one convenient place. The app can be installed on any Android device.

Xiaomi also has other offers on its website, such as free Mi Coupons worth INR500 on a purchase of a Mi 4i 16GB, free colored phone case with the purchase of a Redmi 2 or Mi 4, and cashback offer the 16GB Mi 4i (also available on Flipkart, Amazon, and Snapdeal). The company will have different offers on the website starting today till July 28 to celebrate the anniversary.

Xiaomi is also announcing two new headphones in the Indian market, the Mi Headphone with their 50mm drivers and aluminum construction, for Rs. 5,499 ($86) and the inexpensive Mi In-ear Headphones for Rs. 999 ($15).

hi, Can you please tell me that when MI in ear headphone will be released again? i have check mo store,it looks as out of stock.

what did they launch today?

I just downloaded the app from appstore, they are offering 50 rps off discount on app only till 28th July. Still waiting for something new and exciting from Xiaomi.