CEO Lei Jun announced that the Xiaomi Mi Smart Band 6 has surpassed 1 million shipments globally. And keep in mind that most of those are from China, since sales there started on April 2, but it only went global a few weeks later.

Even so, the Mi Band 3 hit the 1 million mark in 17 days, the Mi Band 4 got there even quicker, just 8 days. The cheap-but-capable smart bands have been waning in popularity, while Xiaomi’s “hearables” (i.e. more advanced wireless headphones) have been picking up the slack. They helped the company secure its second place in the wearables market. 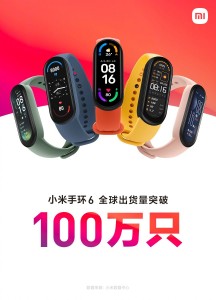 The Mi Bands first came around in 2014 and were pretty basic. The original had only three LEDs and didn’t even have a heart rate sensor. Yet Xiaomi managed to sell over 10 million in 9 months. It helped that they cost only CNY 80 a piece (around $13), the current model is triple that (more if you get the NFC version, but that’s available only in China).

Xiaomi has sent out promo boxes to reviewers in China, which contain all the major Mi Band models – from the very first one to the 6. This offers a nice retrospective of how far the bands have come. Here’s what that box looks like. And before you ask, it doesn’t seem like something you can buy, it’s just a reviewer’s package.

All (major) Mi Band versions in one box (image credit)

The original band had three LED indicators and its main functions were notifications and sleep tracking, the Mi Band 1S added a heart rate sensor. The second model added a 0.42” OLED display, the third one enlarged it to 0.78” and introduced the NFC version, then the fourth model switched to a 0.95” color OLED. The fifth one made it bigger and simplified charging with a magnetic cable, the sixth (current) model filled the front with a pill-shaped 1.56” display.

I have MiBand 4, and again the same problem with Mi:-> They're data hungry, want to know everything about you. You know, since MiBand 4 onwards they have a encrypted lock in place, which prevents other (including open source) apps from acce...