Xiaomi is announcing the Mi Max 3 on Thursday, but the company decided to go ahead and to tease the key selling points in adavance - the huge screen and massive battery. The rest of the specs were leaked in Chinese media, leaving little unknown ahead of the official event. 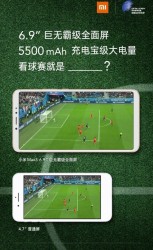 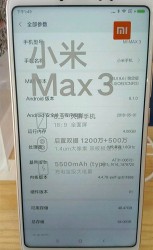 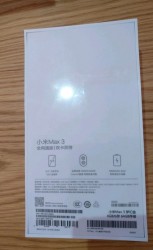 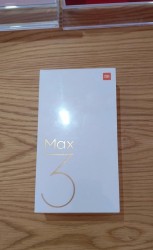 The other specs leaked in live images. The chipset will be Snapdragon 636 with eight Kryo 260 cores, clocked at 1.8 GHz. The dual camera setup is the 12 MP + 5 MP combo that is used in the Redmi Note 5, with the main sensor having 1.4µm pixel size.

The device photographed has 4 GB RAM and 64 GB storage, but we know from TENAA that Xiaomi is preparing different memory variants. The MIUI is listed as v9.6 and it is based on Android Oreo 8.1.

The last unknowns are colors, pricing, and availability, but we will know that once the curtain lifts on July 19.

Hmm, if they do software optimization correctly, it could be a long lasting battery life

Oh yeah. True. I guess you should wait for now