The Mi Mix 2S has the same display as the Mix 2, which Xiaomi introduced as its "Full screen display 2.0". It's a 5.99-inch LCD display with 18:9 aspect ratio: the golden standard in smartphones these days. Xiaomi says the phone is capable of 585 nits of brightness, which should yield some pretty good sunlight legibility. We will be testing for this number as well. 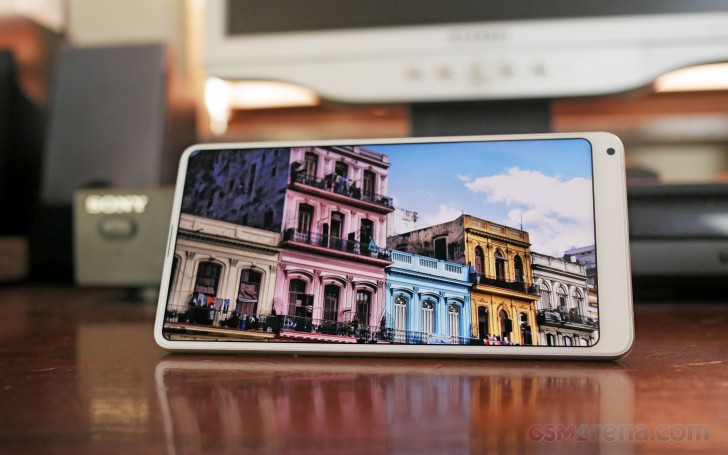 With the original Mi Mix, Xiaomi was the first Android smartphone to approach Google to push the aspect ratio past 16:9, which was Android's requirement. Since then, companies have been adopting taller displays to keep phones compact as displays got bigger. We can't rule out the possibility of a notch. Although the company doesn't have a phone with one, the Mix series is the most likely candidate, unless Xiaomi would rather innovate something superior to a notch solution.

In fact, Xiaomi's ultimate goal is to one day make a totally bezel-less smartphone without a notch. Until then, the company has found it necessary to include the front camera, light sensor, and LED notification light in the lower bezel.

The Mi Mix 2S didn't quite reach the promised 585 nits brightness but it was able to go past 500nits when we switched the display mode to the "Increased Contrast" setting. This yielded a brighter 519 nits while the default display mode didn't budge past 453. This display is able to get quite dim, though. We measured a minimum brightness of 0.9, which is lower than many smartphone displays out there.

The display's colors are quite neutral and some UI elements might even look washed out since MIUI's settings menu is made up of very pale colors and many may be used to a more saturated screens and interfaces. Otherwise, this is a bright and vibrant display.

There are two settings for calibrating the Mi Mix 2S' display: one is the adjustment of the white point, which can be switched between default/cool/warm, or you can manually set it on a color sphere. The other setting is automatic/increased/standard contrast.

The Mi Mix 2S has the same 3,400 mAh battery pack as the Mi Mix 2 and offers Qualcomm's Quick Charge 3.0. We expect battery life to be similar to the Mix 2 since the Snapdragon 845 generally offers a bump in performance with about the same battery efficiency as the Snapdragon 835. 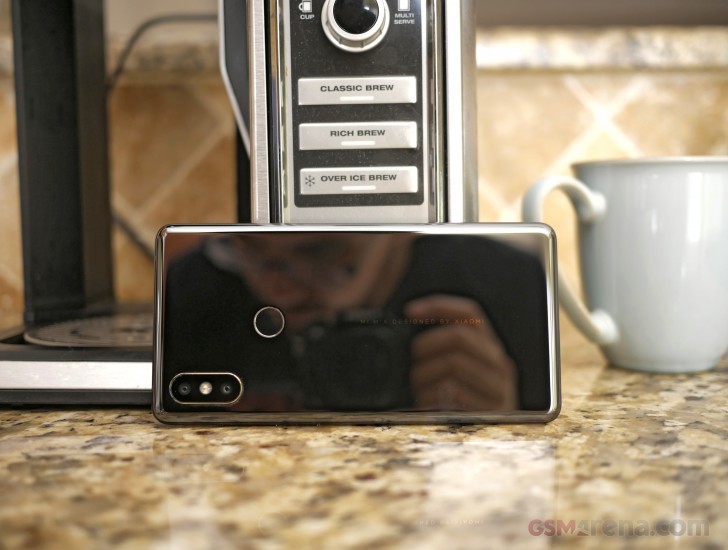 The Mix 2S will be able to charge wirelessly at up to 7.5 watts with any Qi-compatible charger. The company also announced a first-party wireless charger for RMB 99 (about $15). We might expect to see them go for $20 in the States.

Disclaimer: These are not the results we were expecting - the screen-off ones at least. Standby battery draw was unusually high for this combination of chipset and battery capacity. This could be due to running early software on our Chinese review unit. We shall retest this once we are able to get a final retail unit for the intended market.

Our endurance rating denotes how long a single battery charge will last you if you use the Xiaomi Mi Mix 2S for an hour each of telephony, web browsing, and video playback daily. We've established this usage pattern so our battery results are comparable across devices in the most common day-to-day tasks. The battery testing procedure is described in detail in case you're interested in the nitty-gritties. You can also check out our complete battery test table, where you can see how all of the smartphones we've tested will compare under your own typical use.

MIUI 9.5 offers plenty of battery saving options. You can select how apps should behave on a per-app basis or you can leave everything as-is and MIUI will try to prioritize what it thinks won't interfere with push notifications, music apps, and so on. The battery homepage shows you the estimated time remaining, and even monitors the battery's operating temperature.

If you enable the battery saver, it stays on even while the phone is charging. Battery saver automatically turns off once it charges past 60%. There are options for scheduling battery saver and you can even schedule when the phone should power down and power on before an alarm goes off.

There are a couple of "smart scenes" for saving battery life. The phone will assume you're asleep and mute notifications, restrict wireless activity like Bluetooth, NFC, and Wi-Fi. Meanwhile, "Non-interactive mode" is kind of like a more hands-on version of Doze - when the phone isn't being actively used, neither the display nor LED notification light will activate with new notifications and touch sensors will be turned off.

There's a single bottom-firing loudspeaker on the Mi Mix 2S. The grilles are no longer symmetrical like they were on the Mix 2. There's a single mic hole to the left of the USB-C port and a quad-holed speaker grille to the right.

The loudspeaker is quite loud and doesn't distort at higher volumes. The downside to this loudspeaker is that the lower-mids and bass tones sound muffled. It's loud enough to show a video to a friend or two, but music was definitely not meant to be heard on the Mi Mix 2S' loudspeaker. Notifications, ringtones, and speakerphone, calls are all plenty loud.

The first iteration of the Mi Mix has a 3.5mm headphone jack at the top but Xiaomi removed it for the Mi Mix 2 and and the Mix 2S is no different. You'll need a USB-C to 3.5mm jack adapter to use your favorite headphones.

The Xiaomi Mi Mix 2s did nicely in the active external amplifier part of our test. Impeccable accuracy and nicely high volume add up to one of the best performances out there.

The loudness was just as impressive with headphones on, which was a great start. The stereo crosstalk increased by an above-average amount, but it's not too bad, while the other readings saw little change - certainly nothing you'd notice in real life use. A very solid performance all in all.