The forgotten Xiaomi Mi Note lineup may indeed be headed for revival as speculated a couple of weeks ago. Today, news comes in that not one but two Mi Note 10 handsets have received certification at different regulating agencies.

The Mi Note 10 and Mi Note 10 Pro have received approval at the Thai NBTC and the EEC, and the former has also been spotted at the Singaporean IMDA. Sadly, there are no words on the handsets' specs and the best that can be extracted is the model names - M1910F4G for the regular model and M1910F4S for the Pro. 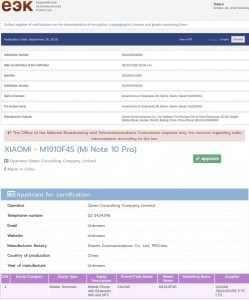 In June, company CEO insisted there were no plans for a Note this year, but now that appears not to be the case. Following up on the two-year-old Mi Note 3, the upcoming phones will break the continuity in the naming convention, but we've seen that time and time again. More curiously, we're wondering if the Note 10 or the Note 10 Pro (why not both) might be the rumored Xiaomi phone with a 120Hz screen, 5x telephoto and 8K video recording.

If the initial report from Ice Universe is correct, we'll be finding out as early as next week.

I think this will be the substitute to their max series. Since we haven't heard about the mi max 4 to be released this year. And expected to be more expensive than max because the note series before is equivalent to their high end mix series now.

How did we jump from the Mi Note 3 to the Mi Note 10? I have no idea what's going on with this naming scheme.

They separated redmi as sub brand to make cheaper phones, and to enter premium phone market under Xiaomi name. so this phone not going to be sold at redmi prices