Xiaomi will unveil the Mi Note 2 next week, on October 25 to be precise. This will be the successor to the original Mi Note from January 2015, so it goes without saying that it's hotly anticipated. The phablet has so far been rumored to sport a bezel-less curved 5.7" touchscreen, and high-end specs all-round.

The Mi Note 2 is said to be powered by the Snapdragon 821 chipset, with at least two hardware versions - one of which will boast 4GB of RAM and 64GB of storage, the other making that 6GB and 128GB, respectively. This top of the line model could even get 256GB of internal space instead of 128, as well as QHD screen resolution (while the entry-level variant will settle for 1080p). 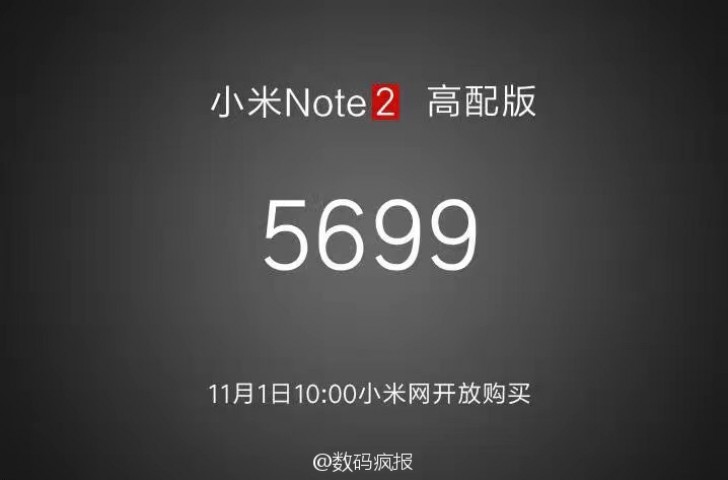 On the other hand, the high-end Mi Note 2 variation is shaping up to become the most expensive Xiaomi phone ever sold, if a new rumor out of China is to be believed. This claims that the image you see above is a leaked slide from Xiaomi's presentation of the Mi Note 2. And that big number in the middle represents the price - CNY 5,699, equating to $845 or €769 at the current exchange rates.

Compared to previous Xiaomi offerings that's quite a lot, but then again the 128GB iPhone 7 Plus is $869 in the US. If this pricing turns out to be true, and that's a big if, then Xiaomi clearly wants to leave behind the affordable days for its Mi line. We assume Redmi devices will still be cheap, but the Mi Note 2 could step into premium pricing territory. We'll have to see how well it will do, sales-wise, provided this actually happens.

The purported leaked slide also reveals that the Mi Note 2 is set to go on sale in China on November 1 at 10 AM.

$800+ seems exagerrated Right now the mi5s plus 6gb/128gb is below $500 selling already . very similar specs except maybe for the display

Now everyone launching phones above 800+ USD, iphones seems to be cheaper option now.

I really hope that is a single core benchmark or something because +$800 for this phone is a lot :S