Xiaomi has locked out the Top 3 spots in AnTuTu’s ranking of fastest Android phones for April. The Xiaomi Mi 9 Explorer is in the lead, followed by the vanilla Mi 9 and the Black Shark 2 gaming phone. All Snapdragon 855-powered phones, in case it wasn't clear. 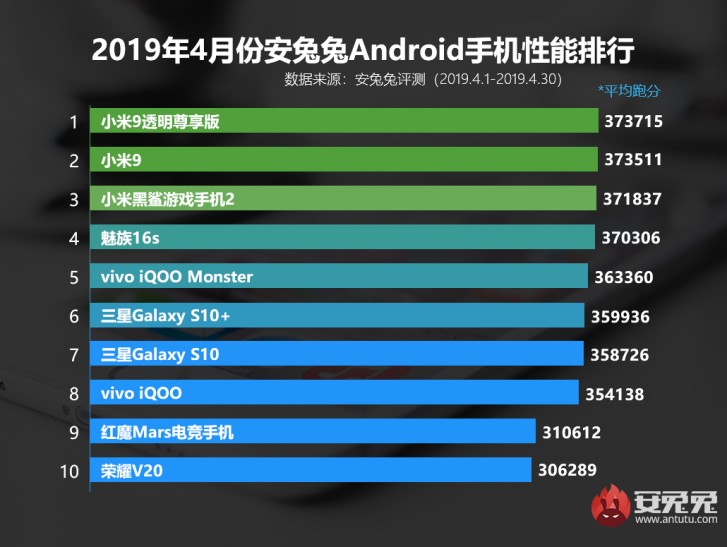 This displaced the Meizu 16s, which held the top spot last month. Note that the chart below doesn’t include the ZTE Axon 10 Pro 5G, which posted a score in the 380,000 range (yet another S855 phone, but the score was boosted by the use of the F2FS file system).

The Axon, as well as phones like the Oppo Reno 10x zoom, Lenovo Z6 Pro and nubia Red Magic 3 are launching in May, so they aren’t included in the April chart, but expect a few new names on the list next month.

Anyway, the Top 10 includes a few more gaming phones – the vivo iQOO and the iQOO Monster version, the ZTE nubia Red Magic Mars (a Snapdragon 845-powered phone) and the Honor View 20 (Kirin 980 running in high-performance mode). Samsung's Galaxy S10 and S10+ flagships are in the running as well, though they don't rely so heavily on gaming for their marketing.

Well, i have RN7pro and can say that MIUI is quite laggy on my device, which is not actually a weak phone

A guy who owns the Black Shark 2 enabled GPU boost on the device and got 400K+ on antutu, if Xiaomi was a company like those they would've done that first.