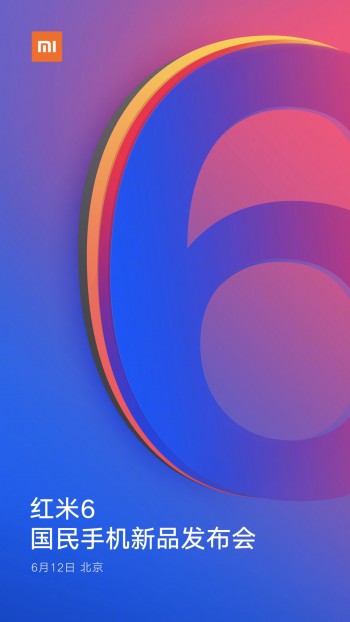 We have seen the Redmi 6 on TENAA, followed just a couple of days later by the Redmi 6A. Today Xiaomi lifted the curtain and announced on Weibo a launch date for the affordable series. The company will showcase the devices on June 12 at an event in Beijing.

The Redmi 6 is expected to come with a white notch on the front where the selfie camera, the earpiece and the proximity sensor will be positioned. According to previous TENAA listings, the panel could be 5.84” with Full HD+ resolution and 19:9 tall ratio. There might also be a Redmi 6 Plus or Redmi 6 Pro that will be taller and will have octa-core CPU.

The Redmi series also haя a phone in the lower price spectrum. This place will be filled by the Redmi 6A that appeared on the Chinese regulatory website. It will be either with a fingerprint scanner on the back and a dual camera, or without the sensor and the dual setup, just as we reported.

Next Tuesday we will know if Xiaomi is really going to release four new devices. The day will be packed with new phones, since vivo is also having an event in Shanghai where the NEX series is expected to arrive.

Mid-range Xiaomi with a notch revealed by TENAA

Xiaomi Redmi 6 pops up on TENAA

notch is needless with obvious large bezels. if they did, better with small production scale, it just because people will go for redmi 5/ 5plus rather than ugly notched screen with big bezels.

...I just bought a Redmi 5A for my grandmother...maybe I should've waited a bit...oh well, price was fine I guess