The global version of Xiaomi's Redmi 9 is known as, well, Redmi 9, and it seems like one intriguing offer right off the bat. It can easily be mistaken with the Redmi 9 Prime for the Indian market and that's okay - both phones are nearly identical - the Redmi 9 is the one with NFC, while the Prime has water-repellent coating instead.

The Redmi phones is where it all started for Xiaomi and the series is still by far the company's most important. It grew immensely over the years, with the highest standing members able to trade blows with some of the most powerful flagships out there. Yet the pure Redmi phones always stuck to the same formula - deliver solid smartphone experience at the tightest budget possible thus maximizing the value for money.

The new Redmi 9 is arguably standing closer to its Note counterpart - the Redmi Note 9 - than any of its predecessors. It has the same large 1080p screen and a very similar MediaTek chipset, and even if the cameras have seen some downgrades they cover the same focal lengths, offering mostly the same sort of versatility.

This has helped bring the price down to just over €120 - or about 10% of what an iPhone 11 Pro Max costs. Quite tempting when you consider that the Redmi 9 finally makes the switch to a 1080p screen and offers a large battery that should last you for days.

Before we unbox the Redmi 9 let's take a closer look at its key specs.

That reveals another thing missing from the Redmi Note 9 - the water-repelling coating. That's hardly going to be held against the Redmi 9, though, as it's hardly a feature to expect in the entry level segment. And it's not like the Note 9 had an IP rating either so you'd still better be careful around the pool.

The Redmi 9 is avaialble as Redmi 9 Prime in India and oddly enough - it does feature water-repellent coating. The trade-off - there is no NFC support.

The Redmi 9 is a budget phone, but you still get a transparent case in its retail package that fits well around the Redmi 9. The phone also has a pre-applied rather cheap screen film for some extra scratch protection, but it was a massive smudge magnet and we got rid of it fast. 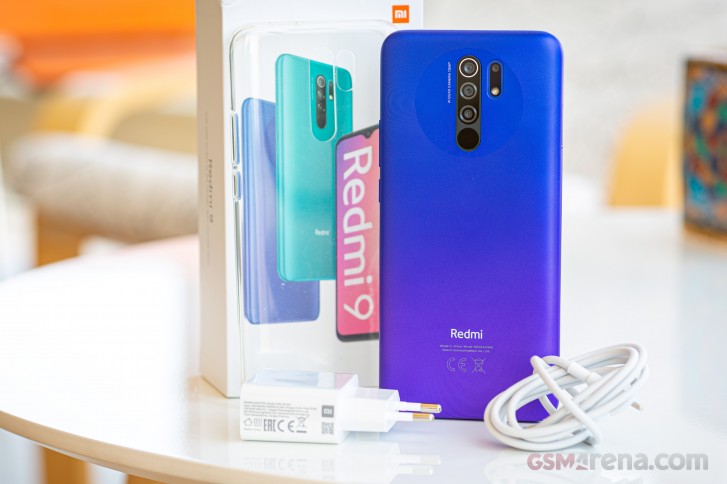 We do appreciate the protective case, but you should know that it comes with a sealing cap for the connectivity port. And while it provides for some water protection, it was rather irritating having to remove it every time we had to recharge the Redmi 9.

The entry level nature of the phone is betrayed by the 10W charger in the box, despite it supporting 18W charging. If you want to maximize that potential you'll have to get a charger of your own, but if you are going to be overnighting it anyway it hardly makes a difference. And the phone has the current USB-C port so you might even have a suitable charger at hand.

I had one for 1 year Good battery،good camera at day light,auto focus and jerky lens problem at low light and continues video shooting , heavy Mobile is my experience with it

Probably that's why they put out the Redmi 9T which have a snapdragon 662 chipset.