The Redmi Note 10 Pro is among the few Redmi phones where you do get an actual IP rating - IP53 in this case. This means the phone is dust protected and can withstand spraying water and light rain. Even better, Xiaomi has bundled a silicone case with a cover lid for the USB port, which should provide an even better overall protection. 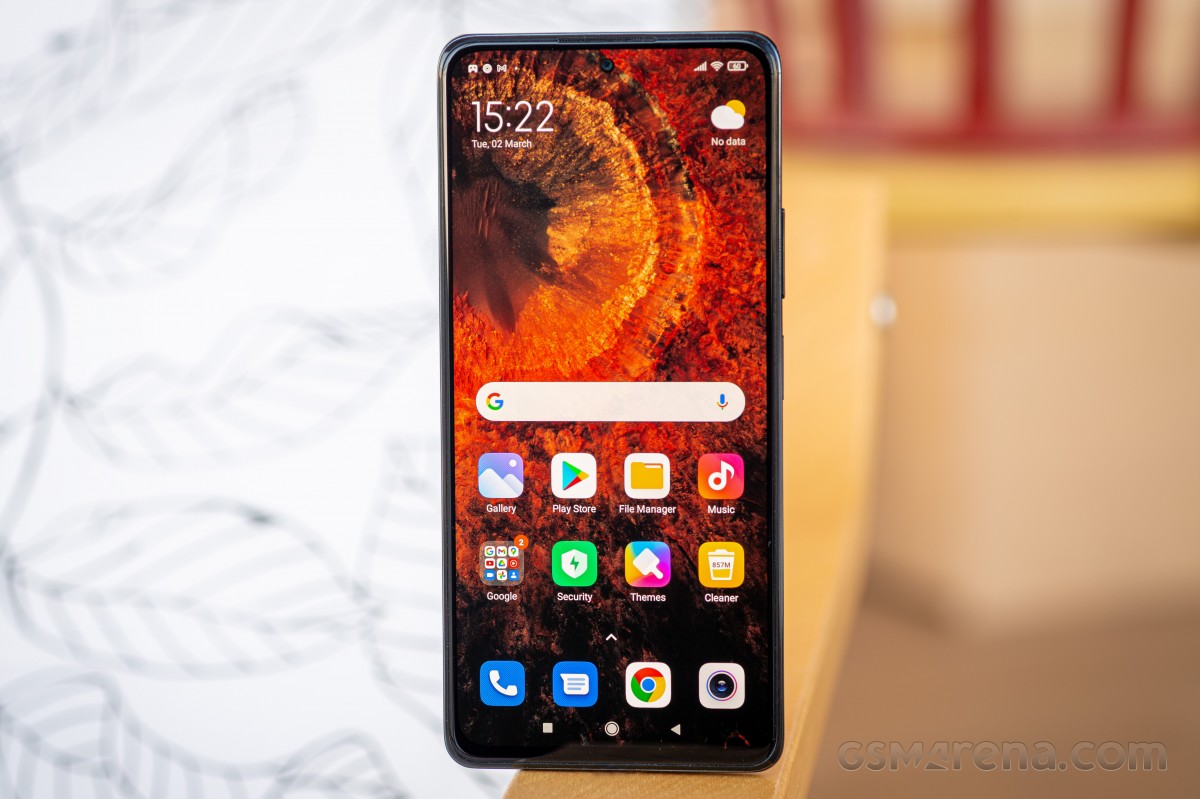 Other than being sealed against dust and water, the Redmi Note 10 Pro is your typical smartphone. There is a flat Gorilla Glass 5 on top of the new 120Hz OLED screen, a slightly curved piece of what looks to be glass on the back, and a glossy plastic frame between those two pieces.

Our unit is the Onyx Gray option, which features this chameleonic dark gray hue on the back. It catches and reflects light in cool yet subtle ways. The other available color options are Glacier Blue (light reflective blue) and Gradient Bronze (gradient from dark to light orange). Xiaomi seems to have chosen these paintjobs really well and despite that these may seem flashy, they are most certainly not. 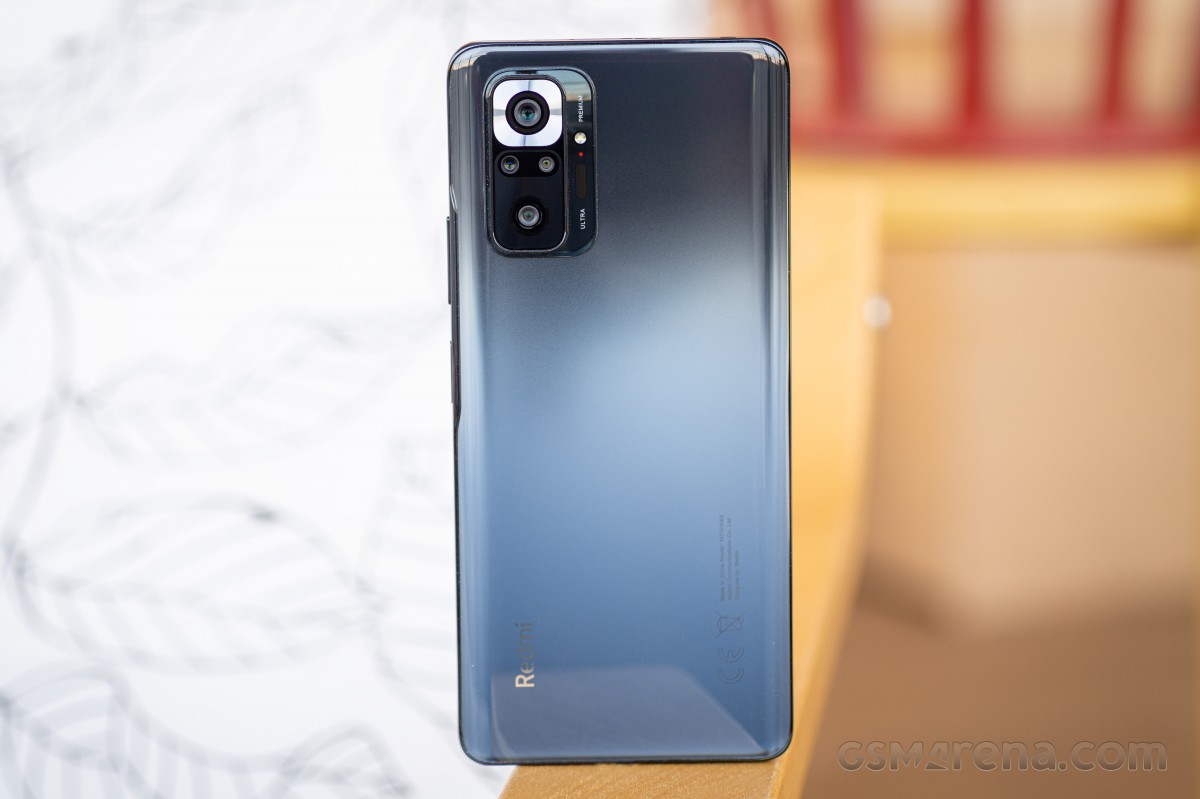 The back, and the frame, are glossy though, and fingerprints and smudges stick easily, and they will eventually ruin the looks. The Redmi Note 10 Pro, if carried case-free, should be wiped clean more often than some of you would like. That's why we suggest the brighter orange or blue option if you don't intend to use a case.

So, the front is all about the new 6.67" OLED screen, which has a regular 1080p resolution but offers 120Hz refresh rate. It does look and feel gorgeous on the Note 10 Pro, the bezels are pretty thin for this class, though the chin wasn't trimmed the way we see on some flagships. 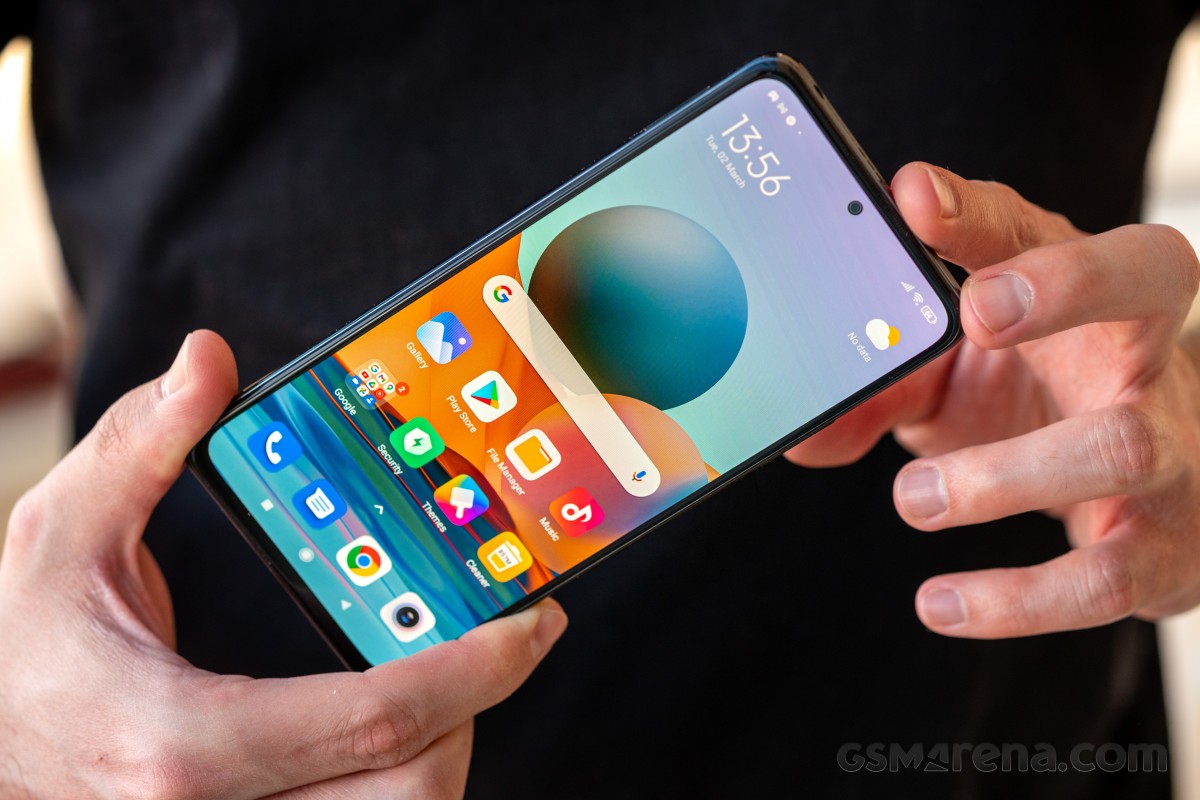 The screen protection is handled by a Gorilla Glass 5 piece, mostly flat, with these familiar 2.5D edges. On its very end around the top, you will see one very thin earpiece grille. Behind that is a directional speaker, which acts as an earpiece during calls (the sound is coming through this grille), and a stereo speaker when playing music (the sound comes from the vent on top of the phone).

The OLED panel has one tiny punch-hole making way for the 16MP selfie camera. And no matter how tiny it is, the thing is an eyesore for any perfectionist. See, the camera isn't exactly centered in this cutout and it is a little bit higher than it should be, almost hitting the top border, while leaving more space around the bottom. A picture is worth a thousand words they say, so here is one. 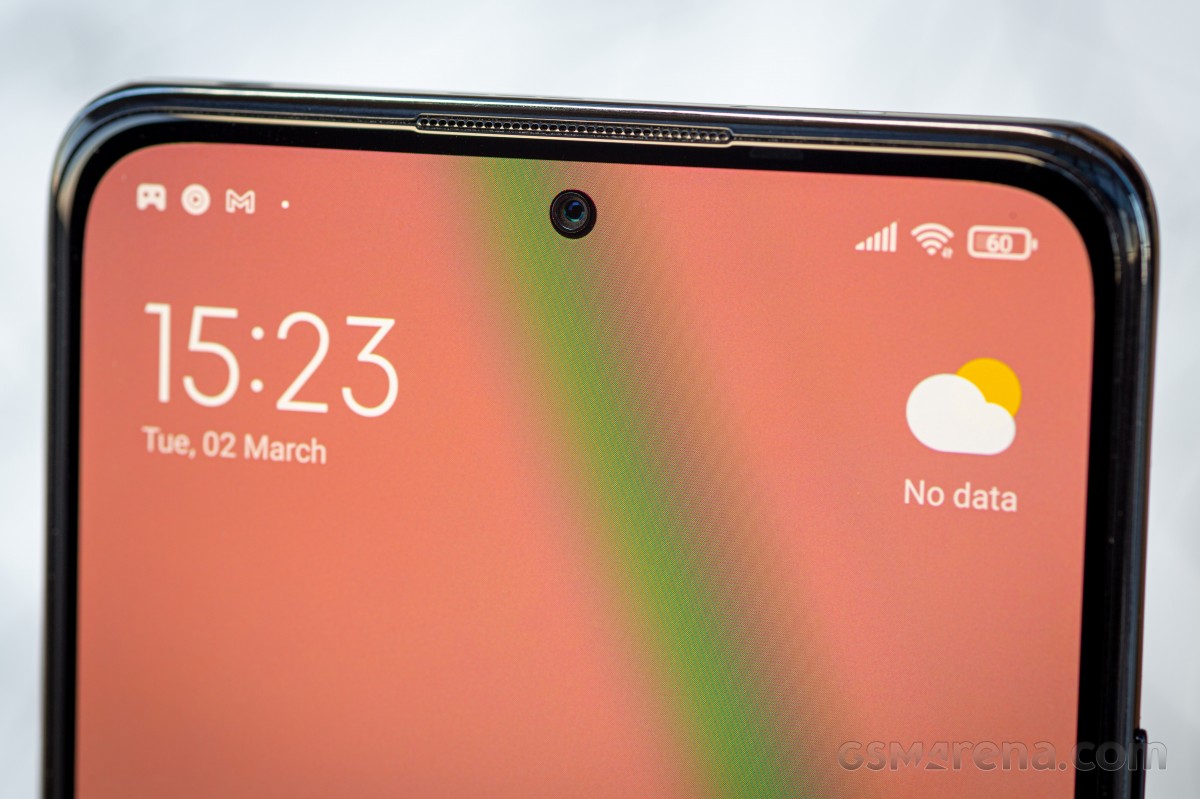 We know we are a bit nitpicking here, especially when considering the price, but we felt we needed to mention it.

And while we are on the subject of nitpicking, the cheap screen protector that came pre-installed was not applied that well, and its punch-hole was stepping on those already misaligned circles. Yes, it was terrible.

There is no under-screen fingerprint scanner on the Redmi Note 10 Pro. Xiaomi is still relying on the side-mounted always-on sensor, and we prefer it this way. The sensor is blazing-fast and super accurate, and we'd never trade it for a second-rate under-display alternative. It is placed on the Power/Lock key, which is both convenient and a curse. But you can solve all potential issues by changing the Fingerprint Recognition Method from Touch to Press and never be locked away again by those accidental misreadings. 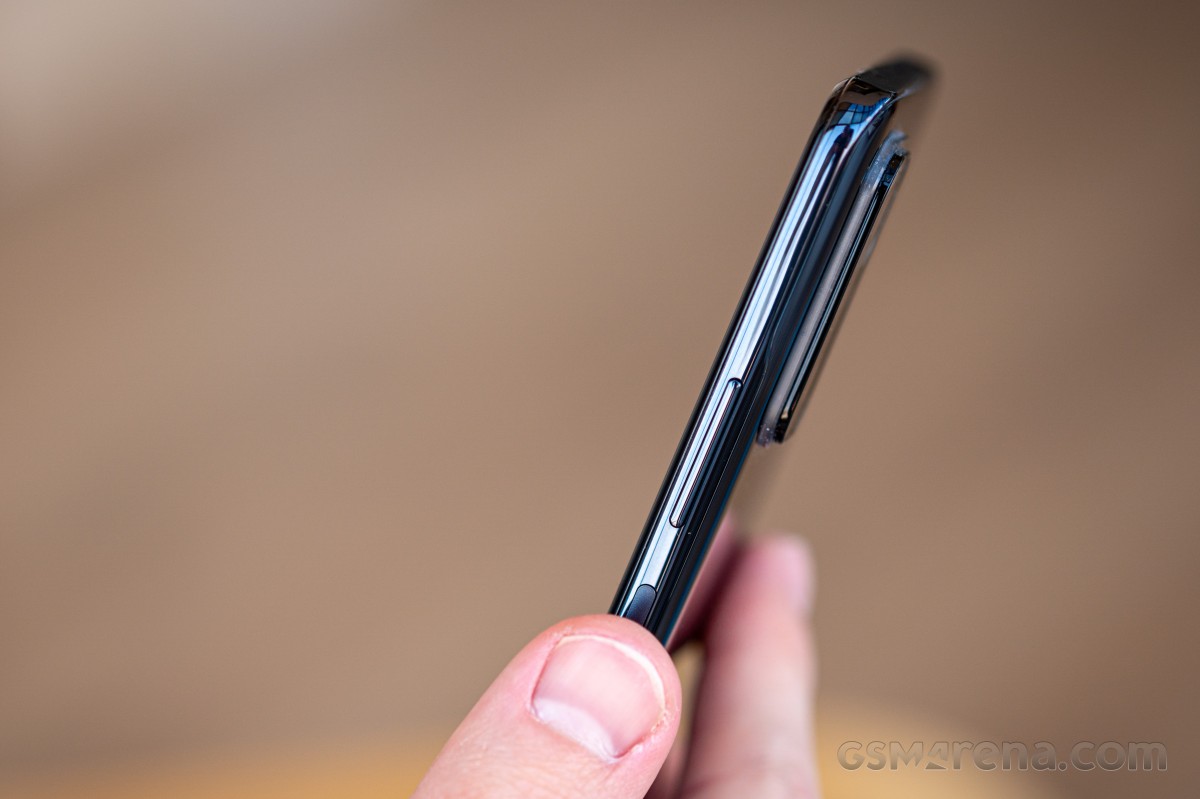 The rear glass is slightly curved towards the frame and makes the Redmi Note 10 Pro look and feel even thinner than it is. The only thing of interest here is the quad-camera setup, which looks rather peculiar. Let's take a look. 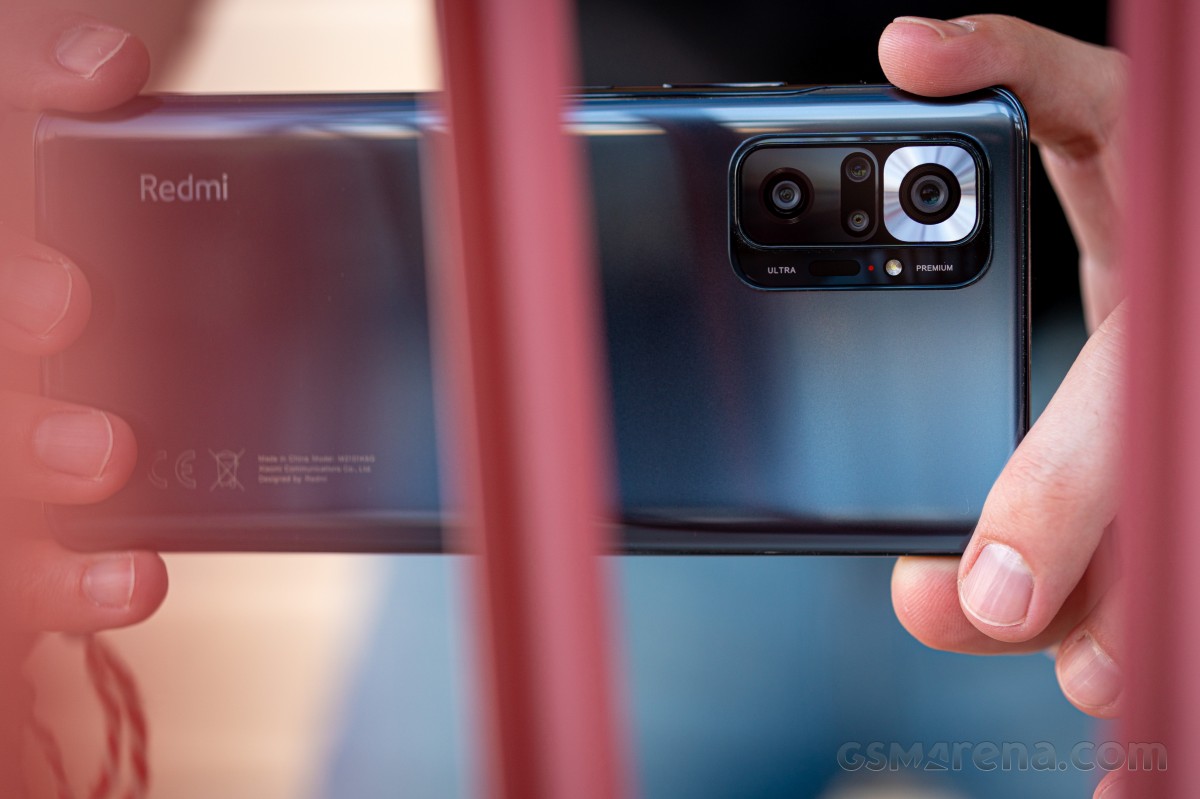 The camera setup uses a stairway-like arranged glass. The bottom piece contains the raised smaller one, obviously, the LED flash, and what seems to be laser-autofocus tech though Xiaomi hasn't shared any details. It could be another type of sensor, say a color temperature or a light one, but it's just a wild guess until we know more. 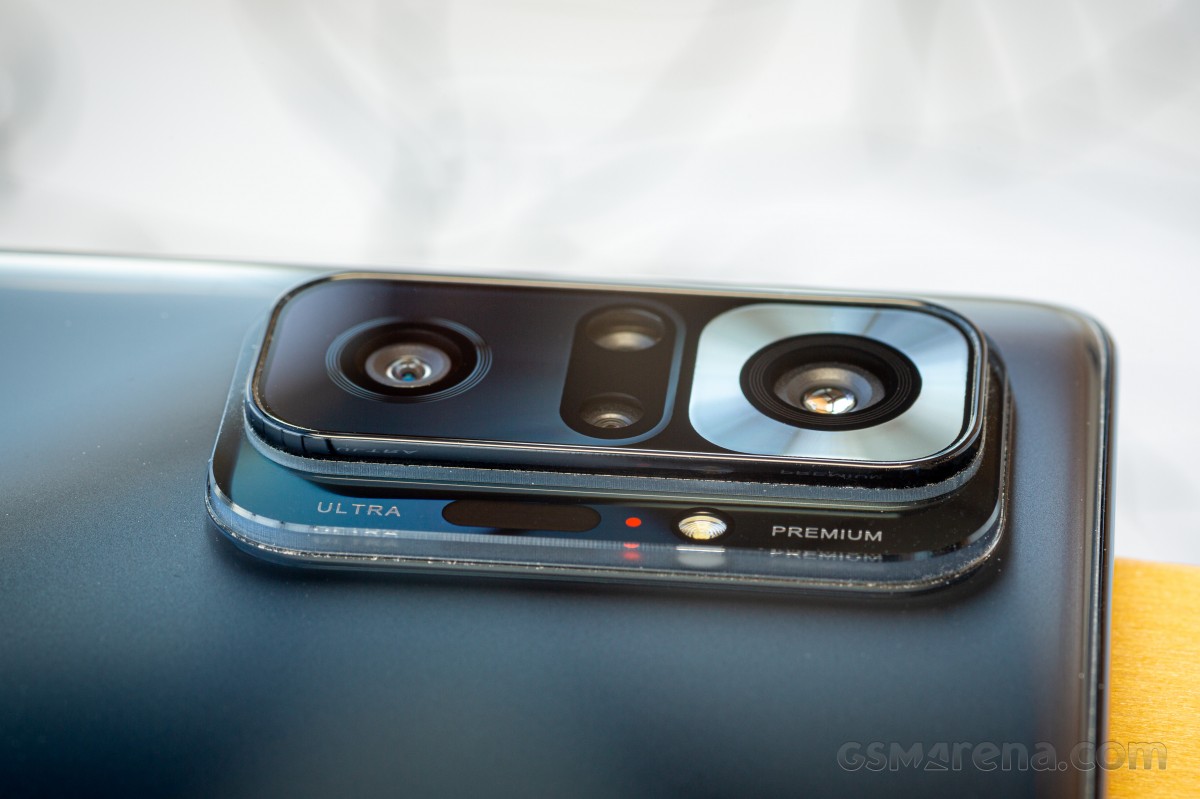 The top glass contains the four cameras. The biggest one is on top - the 108MP shooter by Samsung. Below are the 5MP macro cam with a telephoto lens and the 2MP depth sensor. Last is the 8MP ultrawide-angle snapper.

The frame is made of plastic, glossy at that, but it's not as slippery as we expected it to be. The visible screen enclosure probably helps a bit, and the grip is quite good.

There is a lone ejectable tray on the left, and it is a tri-card slot - you can put two nano-SIM cards and a microSD one. The volume rocker and the power/fingerprint scanner are on the right.

The sides of the Redmi Note 10 Pro

The top seems pretty crowded - here, you'd find the IR blaster, a second mic, a speaker grille, and the 3.5mm jack. The bottom has the other speaker, the USB-C port, and the mouthpiece.

The Redmi Note 10 Pro is 2mm shorter and a hair thinner than the Redmi Note 9 Pro. It weighs 193 grams - meaning it is 16 grams lighter than its predecessor.

Handling the Redmi Note 10 Pro is a nice experience. While the back is very slippery, the frame provides enough grip, and the Note can be handled hassle-free most of the time. That is until your hands become sweaty, then you should be extremely careful. There is a case in the box, so you are covered right from the get-go. 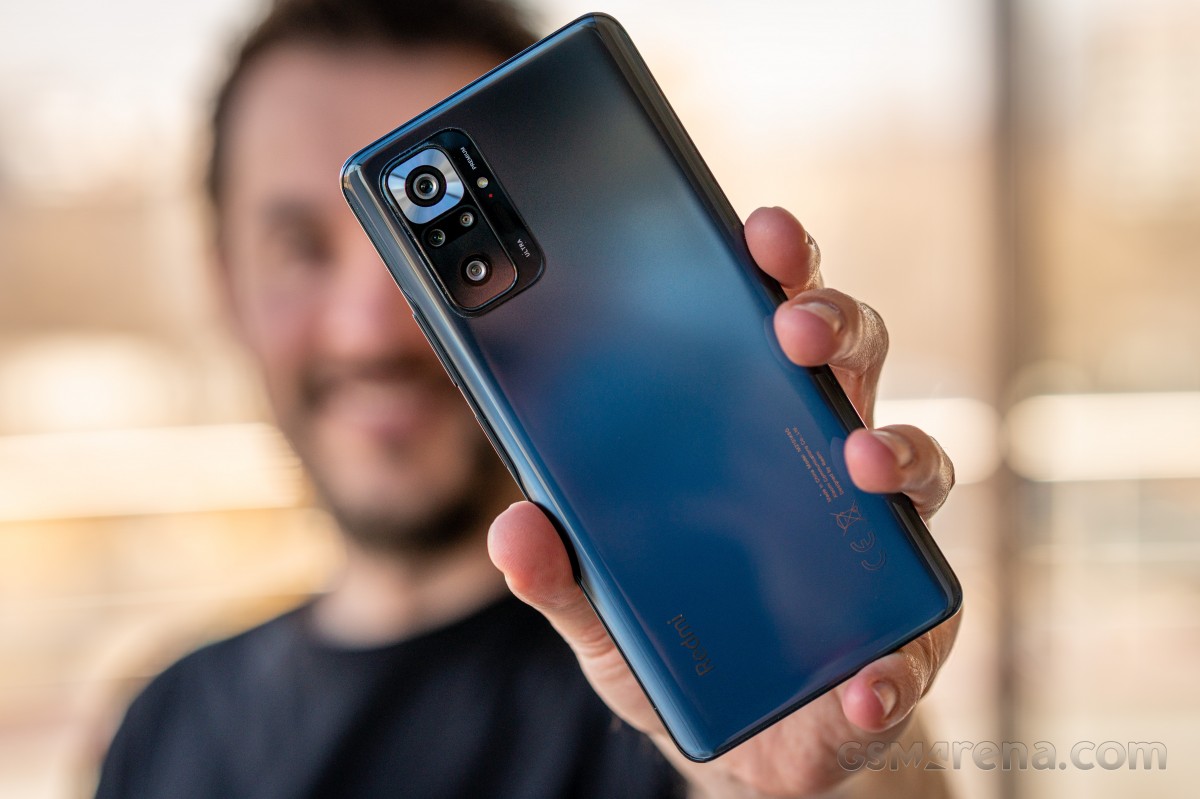 Finally, the Redmi Note 10 Pro is neither bulky, nor heavy, and it feels quite good in hands and in pockets. It is even lighter than the Note 9 Pro, and if you've handled the old one for a while, you will definitely feel the difference.

Xiaomi did good with the Note 10 Pro - while it isn't a perfect execution - remember the selfie cutout - it's a great one for this price bracket, and we were delighted to see an official IP53 rating. Here is hoping all mid-rangers follow suit this year.

Althought it is a 2021 device, i found it to be still competitive and even better than some 2022 devices. Surely it represents a high point in the Redmi Note series as a whole👍! I still think 2021 was Xiaomi's Best!🍚

Love this phone! My only issue is with the design, the 3.5mm jack is at the top.

Didn't have problems so far with this device. Works great,good battery life also