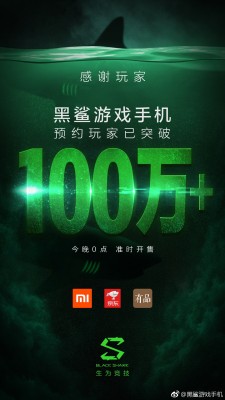 Do gaming phones have a future? Well, we’ll have to wait until tomorrow to see how many of those registrations are converted to sales, but with numbers like this after just a short teaser campaign, things are looking bright for the Black Shark.

PS. It wouldn't surprise us if this initial launch has limited quantities available.

Weekly poll: do you think gaming phones have a future?

It has L1 and L2 shoulder buttons and a joystick. Pretty ok design philosophy.

Remember the Xperia Play? That didn't do too well.

I have to agree somewhat, most phones are capable of gaming and usually you would hope some sort of additional controls would be what allows more gameplay styles. Imagine if they allowed you to Bluetooth a game controller for real controls etc. My on...