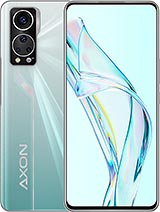 The best under display camera so far

joe nodden, 15 Sep 2021Yes for the price the S20 FE is somewhat trash. Joe, for this price, other types of midrange phones like the samsung a72 has a plastic back, you are probably going to put a case on it anyways, so it doesnt even matter

Thanks for the review GSMArena, even though it's not a very positive review. The screen has low brightness, no HDR, the HRR behavior is poor and the camera is mediocre. But if the price drop sometime in the future i definitely will buy this phone

joe nodden, 12 Sep 2021Oh but I will think of them as trashy. Because they are tra... moreBut, lots of phones have plastic backs what about the s20 FE that is plastic. Is it not? So does it mean the Samsung s20 Fe is 'trashy' ?

Lemon, 11 Sep 2021Just because this phone has a plastic back doesnt mean it i... moreOh but I will think of them as trashy. Because they are trash. It's one thing if it's just the frame that's plastic, but the entire back? Absolute garbage.

Lemon, 11 Sep 2021Just because this phone has a plastic back doesnt mean it i... moreWhere did you buy it from?

joe nodden, 10 Sep 2021Damn that was a funny joke. Now get real. Just because this phone has a plastic back doesnt mean it is a 'plastic piece of trash'.
I just received mine today and it runs apps really nicely. Better than my Redmi 10X in fact. You really shouldn't think of plastic back phones as 'trashy'.

Sronaldo , 09 Sep 2021the plastic material on the back is better and stronger th... moreDamn that was a funny joke. Now get real.

joe nodden, 09 Sep 2021Man I really wanted to like this phone due to the under dis... morethe plastic material on the back is better and stronger than most of the glass back of other phones so I think you have to go for this phone joe

Man I really wanted to like this phone due to the under display camera. But a plastic piece of trash is not worth $500.

So the price is about $500 which translate to INR 7.000.000, and it doesn't officially launch in Indonesia so i have to buy it directly from global zte website or through third party reseller which can make a price hike, plus it doesn't have official service centre here. I think i'll pass. Maybe i'll wait for the upcoming s*ms*ng M52

asani, 22 Aug 2021even without gorilla glass do you still like it?Yes. Just put on a tempered glass film and a rubber case then your done!

LOL price is about 288Euro.!! (source GSMarena specs)
Dream on, its more like double of that and around the 500Euro mark

Just saw it teardown by jerryrig the thing that crack is the plastic mid frame nothing serious, and it have a big vapor chamber with heat paste also a large graphite sheet now just waiting for the review from gsmarena, the quality of the display is what i concern most

Apple-Android User, 22 Aug 2021Have you seen the price? I would buy this. I don't car... moreeven without gorilla glass do you still like it?