It has been less than a week since Apple unleashed iOS 8 to the masses and already it's running on 46% of all iOS devices linked to the Apple App Store. The numbers are from the official Apple developer portal.

Naturally, as iOS 8 numbers are rising, the iOS 7 usage has started falling down. It's currently at 49%, but it's going to continue spiraling down in the coming days and weeks. Versions prior to iOS 7 are taking up the remaining 5%. 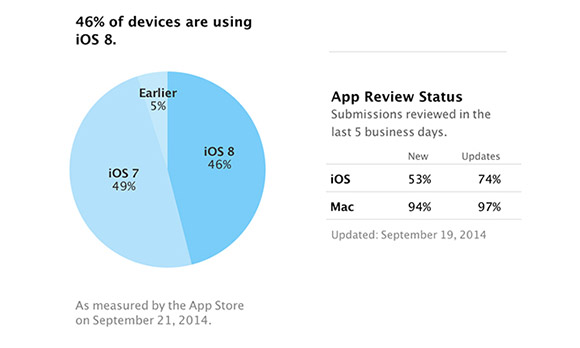 Just five days ago, the iOS 8 adoption rate stood at 16%. AppleInsider cites a report from ad network Chitika, which has monitored iOS 7 adoption over the past year. It says that iOS 7 reached its peak at 90% for iPhones and 85% for iPad days before iOS 8 was revealed at WWDC in May.

Now with the iPhone 6 and iPhone 6 Plus getting their spots in stores around the world, iOS 8 will gain even more traction. Here's our in-depth preview of iOS 8, which will show you everything that's new in Apple's latest mobile OS.

iOS 8 is filled with bugs, apps are crashing, Apple please fix the same at the earliest.

i suggest you read the details first it said that for the ip4s below. ios8 is not advisable since it will slow down

for those who didn't update, I suggest to wait untill apple fixes the issues. this update ruined my iPad Mini. home button is not working properly. screen sensitivity is totally out of control..