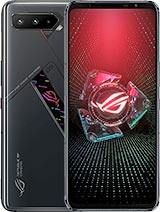 Dometalican, 11 Mar 2021I just looked at the US site and we're apparently not ... moreThank God I was wrong about this. Lol. It's on our US site.

Anonymous, 20 Apr 2021I guess ROG Phone 5 Pro is a scam. There aren't any up... moreI was really hopeful about it but now I've to kinda agree with you, unfortunately.

Raymond, 20 Apr 2021On idle, the ram usage for rog 5 is nearly 6-7GB or even hi... moreRemember that any device will use the RAM available to it. And will only start clearing things once it runs out of RAM. Your regular desktop pc will see higher RAM usage as well after opening up a few programs. Until the phone sees a reason to clear that RAM, it keeps it in there in the case you need to access that data stored in RAM again in the near future.

I guess ROG Phone 5 Pro is a scam. There aren't any updates from any of the social media. Expected release date is April and yet no countdown whatsoever. People who have pre-order this phone will be so dissapointed.

joe nodden, 04 Apr 2021I'm not at all one for bashing high end specs for bein... moreOn idle, the ram usage for rog 5 is nearly 6-7GB or even higher, if you think about it, 8gb wont be enough and will bottleneck the performance, 12gb is better but still(the highest i manage to reach is 11GB), 16gb is the sweetspot, 18gb is overkill for sure

When the pro ever released ? It said expected in April but it's gonna be May soon. And no one ever mentioned about the updates even from Asus.

ASUS forthcoming camera orientated flagship could be a killer, apparantly 3 models, zenphone 8 mini, zenphone 8 pro and zenphone 8 pro, with the audiophile grade DAC and 3.5mm and improvements on the camera, hopefully, periscope zoom camera, we could have a winner here which will kill all other android flagships this year.

Mslucy, 11 Apr 2021But how is the OS, software, hardware and update circle on ... moreMan its a gaming phone not many people will be interested in camera quality because its a gaming phone .
Get a oneplus 9 pro for camera with 12GB ram and 4500 mAh battery and SD888 you can run any game you want. Any flagshp phone is better than gaming phone because of better camera. Even if ther specs are it worse.
But please tell me which phone on the earth with 8GB ram or more which is a flagship grade ram in a phone wont run smoothly game you want???

CptPower, 11 Mar 2021Well the only difference between pro and ultimate is 2GB of... moreBut how is the OS, software, hardware and update circle on Nubia?
And not to forget the camera... I'm desperate for finding a substitute for my Mate 20X, but not many bigger phones with good specs out theese years 😭

E-man, 01 Apr 2021Where did you buy it? I've been searching for weeks.The ROG 5 is sold on Aliexpress for $595. Quick word of advice, if you're ever looking for a phone and gsmarena isn't helping, Kimovil also shows you where to buy them.

Not dollars. It's 1411 USD at the current exchange rate.

I'm not at all one for bashing high end specs for being "too much" but come on. 16 gigs of RAM? Why? A GTX 1050 equipped PC is faster than any phone with an 888 yet you rarely see people slapping more than 8 or 12 gigs in rigs with those. And those are PC's, people do rendering, streaming, and other stuff on those. Why on Earth is there 16 gigs in this thing?

If I had to guess it's to make people think "Wow big number better", because sadly there are people dumb enough to think like that yet somehow making enough to buy a 1200 euro phone without doing any research.

I'm the owner of rog 5 and I say that phone is great for gaming. No doubt. I'm super satisfied

Get the base model, wtf is that pricing?1200 dollars for a gaming phone you gotta be kidding

Hi guys, I want to know how about software update in this phone, is there any issue that not giving monthly update...?? I want to buy this phone, Pls tell mep
0l6b08j

Bernd, 13 Mar 2021+ No wireless charging + no curved screen + 1080p correct... moreCurved screens aren't very practical for a Gaming Phone, and that is what this is marketed as.

Hardly ANYONE adds the 3.5 jack anymore (THANKS APPLE)

Dude, it has a feature that allows you to plug in and Override battery charging. THAT Is brilliant and Better than wireless!! Especially when the battery is a split
3k /3k