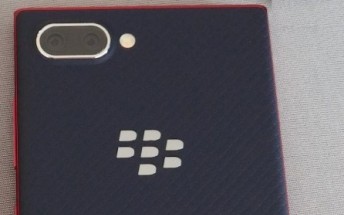 BlackBerry is working on a toned down version of the KEY2 smartphone it launched back in June, and so far we've been referring to this one as the KEY2 Lite. Thanks to the FCC having certified a bunch of different regional versions of it already, we now know what name it will actually be sold under.

It's going to be the BlackBerry KEY2 LE. "LE" might as well stand for "Lite Edition" or something similar, but that bit isn't certain yet. The handset has the model number BBE100 followed by a dash and then a digit that reveals which region a version is intended for.

Thankfully, the BBE100-5 certification process yielded the image you can see above, which is the label you'll find on the box when you purchase a KEY2 LE.

It won't be a 'mini' iteration of the KEY2, keeping the exact same size as that model, only switching materials - the LE will be all plastic - and lowering the RAM amount to 4GB. The Snapdragon 660 SoC may still be in there, but other specs could have been altered in order to make the KEY2 LE cheaper than the original.

The new smartphone is expected to become official in Berlin at the IFA trade show at the end of August or beginning of September.

This is a great idea. Will be interesting to see what they can get the price down to.

This thing is already using a SD 6xx. How much lighter can they get? remove the OS? lol

Could KEY2 be more lighter? Sigh..