The cathode ray tube was revolutionary - it brought screens to the home, before it you had to go to the cinema to watch a movie. In the last couple of decades CRT was displaced by LCD - liquid crystal displays - but now LCDs themselves are under attack from OLED - organic light emitting diodes.

Our poll shows that people prefer OLED, but since it’s a relatively new tech, few phones use this type of display. Samsung was an early mover in the field with 2004’s X120, which had a 1.8” OLED display with 128 x 128 pixel resolution. The number of OLED-packing phones has grown significantly since then but the mobile field is still dominated by LCD.

Here’s a chart showing the slow rise of OLED from the couple of phones in 2004 to nearly a hundred in 2015 and 2016. Surprisingly, 2017 saw half that number. Note that this chart shows the number of phone models with OLED screens released rather than number of units sold. 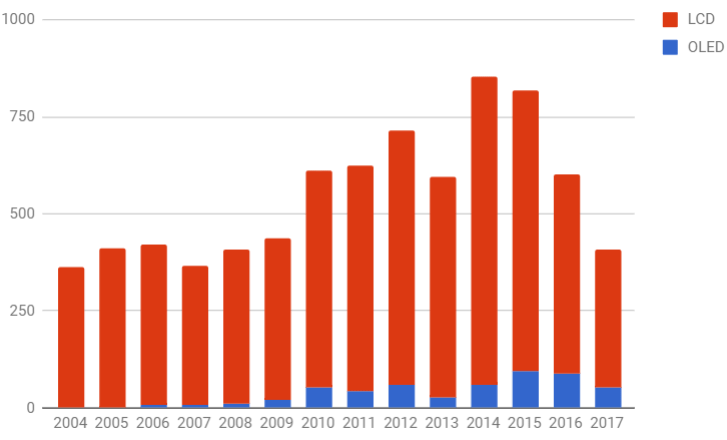 The number of phones sold will depend on the segment. In the high end, phones like Samsung’s Galaxy S and Note as well as Apple’s iPhone X sell millions. In the low and mid range, the cheaper LCDs are more prevalent.

There’s an issue with supplies - or rather with suppliers. Samsung essentially owns the market, it had as much as 95.8% market share at the end of 2015.

Since then, LG has started beefing up production lines with financial infusions from Apple and Google. Chinese companies are trying to challenge Korea’s dominance with the likes of BOE (which is allegedly the screen supplier for the Honor V10. Apple is reportedly interested too).

Note that we removed smartwatches from the stats for the chart. There the picture is the complete opposite - very few LCDs, mostly OLEDs. This stems from the power efficiency of OLED (especially when displaying a black background as most smartwatches do). Also, OLED can be built on a variety of substrates, making it easier to create various shapes - circles, squircles, curves and cutouts.

Will all phones have OLED screens one day? Not impossible, as OLED screens are thinner and have much better sunlight legibility (the power saving is important too). And with manufacturer’s current fascination with non-rectangular shapes, LCD will find it harder to compete.

But will OLED itself be replaced one day? There was talk that Apple is considering micro-LED - a similar technology but without the “organic” part. Instead, classic LEDs are used which can be pushed to a much higher brightness (a typical weak spot for OLED) and at a better power efficiency to boot.

I work at a popular ISP shop that sells a ton of phones a month, and I can say that SAMOLED or just OLED display has a lot more issues than LCD. Almost every third customer has a on-screen burn problem that walks in, and some even have contrast or br...

I was excited about receiving a Galaxy S4 from my sister last month as a gift mainly because it is my first phone with 1080p resolution and Super AMOLED technology. I tried to enjoy the display but I can't help but notice the PenTile arrangement on t...