The Samsung Galaxy Watch Active2 was released back in September of 2019 with the needed sensors to deliver electrocardiograms, but with the promise that the ECG feature itself would be activated sometime by the end of the first quarter of 2020.

Now that the timeframe has almost passed, the person in charge of the ECG feature on the Galaxy Watch Active2 confirmed that the feature is still in development and will arrive at some point.

No new update date was provided. 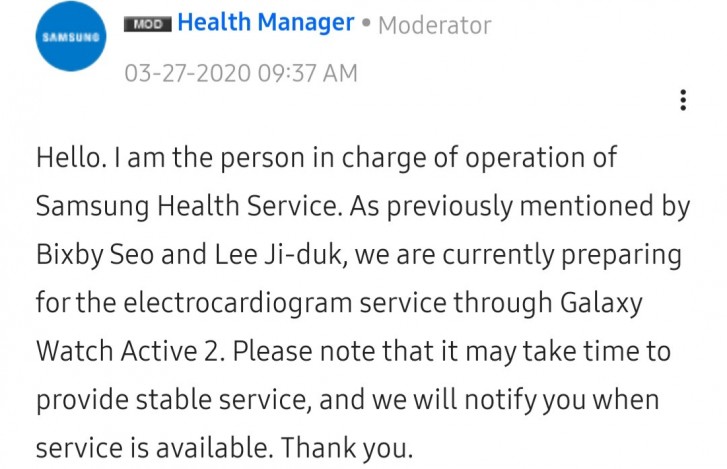 The Apple Watch Series 4 and 5 were the first mainstream smartwatches to feature an ECG and later on smart watches from other makers included the tech to perform an ECG - Samsung's Watch Active2, the Xiaomi Smart Watch 2 ECG Edition, the Oppo Watch and the Withings ScanWatch among others.

Samsung to bring ECG to Galaxy Watch Active in 2020

What is the MOST CURRENT information on the delayed ecg feature on the Active 2? Has there yet been a release date?

With the pandemic and all It's not really that surprising that they delayed it. But hopefully it will come soon.

I have the Apple Watch 5 and the Samsung Galaxy Active 2 (long-story), but I would say it's super disappointing when the market is expecting one thing and another is delivered....the only reason I bought the active 2 was for this feature as I have a ...