The IBM PC was unveiled in 1981 and thanks to a strange decision by IBM, it became the granddaddy of most desktop and laptop computers today. Instead of making everything in-house (as with previous IBM projects), the design team decided to outsource as much as possible.

This led to an open platform that allowed other companies to build accessories, write software and even build entire “IBM PC Compatibles”. Since the PC used an Intel processor (8088) and Microsoft software (PC-DOS and Microsoft BASIC), this was the birth of the “Wintel” behemoth.

Mobile phones never really had an “IBM PC” moment. A Counterclockwise article covered how for a short while the memory card slot was used as an expansion port. You cold add cameras, Wi-Fi connectivity, a GPS receiver and more.

That fizzled out pretty quickly and many of today’s phones are completely sealed shut – replaceable batteries are history, even the memory card slot itself is a rarity.

Project Ara promised to change that. It was partially inspired by the Phonebloks concept and started as a project inside Google-owned Motorola Mobility. The search giant had previously bought some patents from Modu, a pioneer of modular phones.

Modu impressed at MWC 2008 with a tiny phone that could be fitted with “jackets”. For example, the Slim Jacket offered simple feature phone controls, the Boombox Jacket packed stereo speakers. Modu even partnered with Bosch/Blaupunkt to create a head unit for cars that could read music from the phone.

The idea behind Project Ara was to develop “endos” (endoskeletal frames), which would be the only component that Google/Motorola makes. A screen would be attached to a slot on the front, the rear would have slots for expansion modules.

This included anything from the basics – cameras, speakers – to exotic stuff like pico projectors and medical devices. Users would have been free to mix and match modules to their liking.

They could, for example, add several batteries, multiple speakers and so on. Modules were hot-swappable too, so you could carry extras in your backpack and modify the phone in minutes.

The plan was to have three standard sizes: small (about the size of a Nokia 3310), medium (Nexus 5) and large (Galaxy Note 3, to be available later). The larger the frame, the more modules you could hook up.

You would buy a starter kit that included an endo with a low-end CPU, small battery, basic connectivity and a screen module. After that, the possibilities were limited only by what add-on modules you have or could buy from the store. 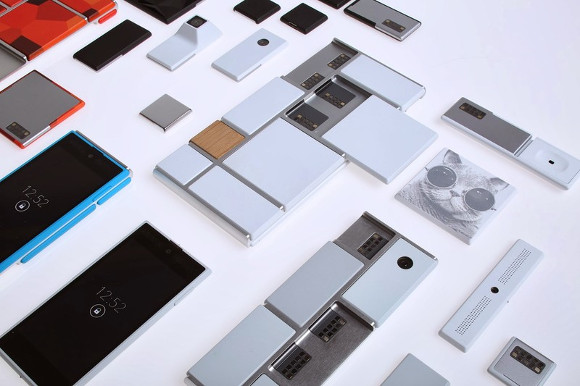 Just think, some modern trends could have easily been replicated by anyone in minutes. Multiple cameras? Easy. Want a screen on the back? Done. Gaming controls? Why not.

Google had ambitious dreams, even suggesting that multiple endos could be daisy-chained so that you could attach as many modules as you needed. Parts of the modules were going to be 3D printed (including the housing and some electrical components), which would have opened the door for thousands of highly-customized modules.

Some of the geeky ambition had to be dialed down – 3D printing and the clever magnet system for securing the modules was dropped. Eventually, the whole project was canceled.

Some of Project Ara lives on in Motorola’s MotoMods. We’ve seen a Hasselblad camera, a Polaroid printer, a gamepad and more recently, a 5G modem. But MotoMods are a far cry from Project Ara.

Obviously, you can attach only one MotoMod at a time. However, the core difference is that Motorola sells you a complete phone with no possibility to swap out its components. The replacing old or broken modules as well as reconfiguring the basic setup of the phone was at the heart of Project Ara.

It was a promise that’s as alluring today as it was back then. For many, the only reason to buy a new phone is to get a new, better camera or because the battery of their old handset no longer holds up. With Ara, such issues could be solved quickly and cheaply. Without Ara, phone upgrades are an all-or-nothing proposition.

Counterclockwise: modular phones were here, you could even expand their RAM

A Project Ara (A8A01) developer smartphone unit gets in the spotlight

The last sentence is not really true: "Without Ara, phone upgrades are an all-or-nothing proposition." Well, if you own a Fairphone 3, you can in fact upgrade your front and back camera modules for a better one (12 MP -> 48 MP / 8 -&...

No, it would not be cheap even if they say in the concept it would. This always happens in the concept phase - but after they add materials, manufacturer expenses, packaging, global shipping to stores, taxes, support and legal in each country and wha...

" With Ara, such issues could be solved quickly and cheaply. Without Ara, phone upgrades are an all-or-nothing proposition. " well there's your reason, lol