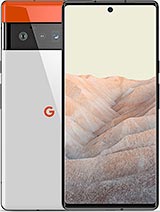 ToxicTaZ, 30 Jun 2021The Google GS101 "Whitechapel" is very simulator ... moreI personally hope that the main camera will include 8K recording.

Seeker23, 10 Jun 2021I'll buy if sd888 You don't won't Snapdragon 888 because battery life will suffer due to Google not being able to optimise the chip plus with Google chip phone will be more efficient and powerful and be able to get more android updates

this is basically Samsung Pixel 6 pro

Google's history of downgrade is continuing:

What is Next , Google will be remove Titan M security chip from Pixel 6

i am Pixel 4a user, its just speechless, must recommended
best value of the money

Ppi density so poor as a pixel member....

Somebody, 27 May 2021I wonder how long until they make screens that are 3 feet t... moreThey already are making. It's called "television".

Akky, 16 Jun 2021Finally looks like a good pixel phone. It would have been p... moreYes! The Pixel 6 Pro might be the best looking Google phone, finally. I'm looking forward to get one. The physical dual-sim feature won't happen outside of China. Look at Apple. The Chinese version has physical dual-sim. All others are single sim and e-sim. But, Google is banned in China. We'll have to deal with the e-sim. What a shame in many levels.

yonkouandy, 18 Jun 2021how much would the pixel 6 pro go for on release? Since it is going to have custom ship which will have Google quite big costs at first, hopefully new decent camera sensors and specially periscope which will increase price quite a bit. Honestly I think at very least 1000 and up, if it truly will have the high specs that are speculated it wont be cheap as it only makes sense, but it would be amazing it not to go more than 1000 euros/dollars.

how much would the pixel 6 pro go for on release?

K, 27 May 2021In my opinion a phone should not go beyond the screen size ... moreI don't really understand why you and some others are giving google such a hard time over the , 6.67 inch display. All the best phones in the market are even bigger..S21 ultra, oneplus9 pro, most pro versions of Chinese flagships, Sony Xperia, and a bunch of others.

You can criticize, but everyone should at least consistent.

Slim, 08 Jun 2021Having a WQHD screen is a necessity if you want to compete!... moreI guarantee you it will be QHD+, or WQHD+ for the 6 pro. But it will definitely not be just FHD. I know the pixel 5 was just FHD, but google is going back to true flagships which have always been QHD+. I wouldn't worry, most of these specs are just placeholders.

Alang Praharja, 27 May 2021Best spec with worst design. Orange color is not match with... moreUnpopular opinion but IMO I think it's a refreshing take on colorways of mobile phones. It doesn't involve tacky branding on the back like Realme phones do which I think is good. I just hope it will be available in my country (Philippines) and they sell it in fair pricing. Always been a Sony fan but it would be nice to own a Pixel phone.

Finally looks like a good pixel phone. It would have been perfect if it had a dedicated dual SIM slot instead of e-SIM.

Oh No! I can't stand the curved edges. Don't do it.

When are we going to get desktop mode?