Leaks about the Honor 20 Pro showed the first periscope zoom lens in the family (following in the footsteps of the sibling Huawei phones). The latest leak, however, pours cold water on our expectations (as far as zoom is concerned, anyway). The camera does have a unique feature, though. 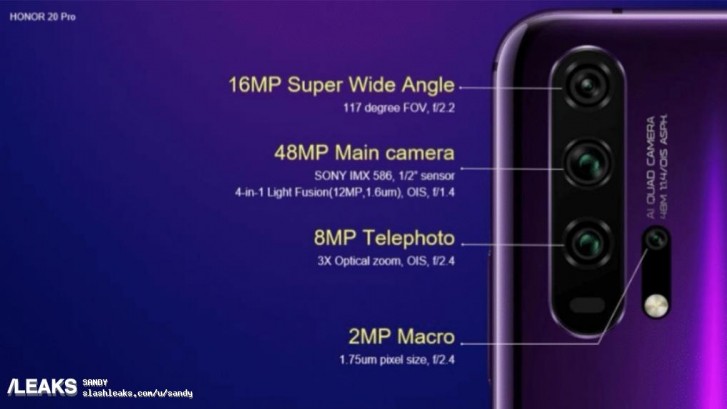 Gone is the telltale square lens seen in the renders. Instead, there’s a traditional 8MP camera with 3x optical zoom and OIS. The rumored IMX600 sensor for the main camera is out too, it seems, replaced by the familiar 48-megapixel IMX586 (also optically-stabilized), which was used on the Honor View 20. The 16MP ultra wide angle camera rounds off the main three. 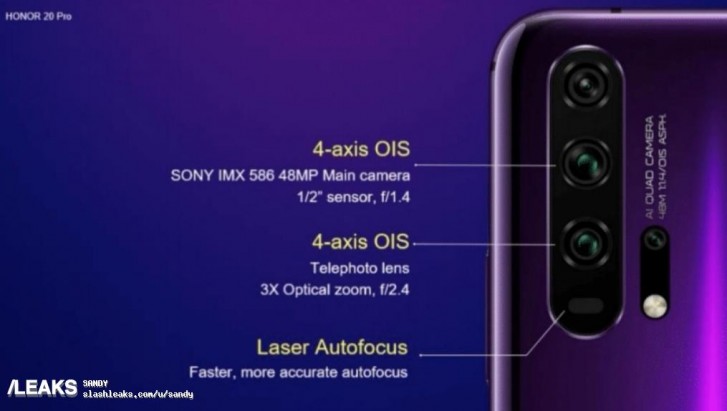 But it doesn’t end here – the small camera is marked “2MP Macro”. This would be the first dedicated macro camera on a phone we’ve seen (Huawei added autofocus on the ultra wide cam on the P30 Pro and used that for macros). Anyway, this camera has very large 1.75µm pixels, topping even the binned 1.6µm pixels when the main 48MP camera shoots in 12MP mode (with pixel binning, the hardware pixels are 0.8µm). 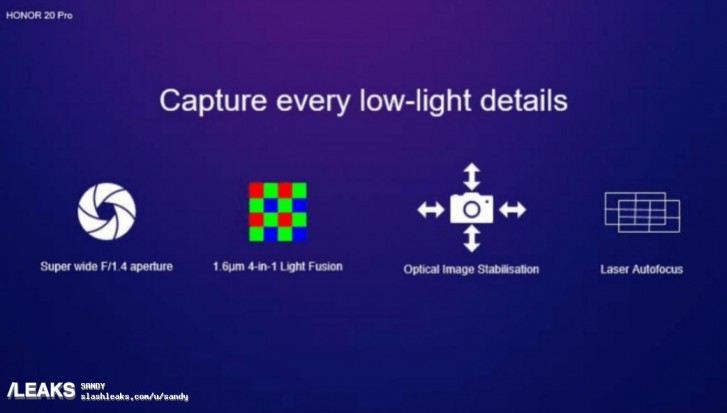 Typically, additional low-res sensors are used for depth sensors, though not here. The Honor 20 Pro also sports a Laser autofocus, which will assist with focus speed and accuracy, but not bokeh.

The Honor 20 phones – both Pro and vanilla – will be unveiled on May 21. There will be a Moschino Edition. By the way, we have new, more accurate renders that correctly show the camera setup.

Confirmed: Honor 20 Pro will have a punch hole camera on the front

Next years Hauwei flagship? This years Mate-series flagships hasn't even arrived yet :-)

You know kid, there is a thing called embargo where journalist or tech writers can't reveal the product unless they are told to do so. That is why you see reviews of devices that has just been officially announced. This is how the tech industry ...

am i the onlyone here feels cheated when gsmarena posts leak/ speculation wherein they already have the said phone?