The Mate 40 Pro runs Android 10 with the in-house EMUI on top, that one in v.11. As is to be expected until the status quo of the US-China relations changes, the Mate has no Google services and no access to the Play Store. To try and make up for that, Huawei offers its own Mobile Services complete with Huawei's AppGallery for an app store, and more options are available. 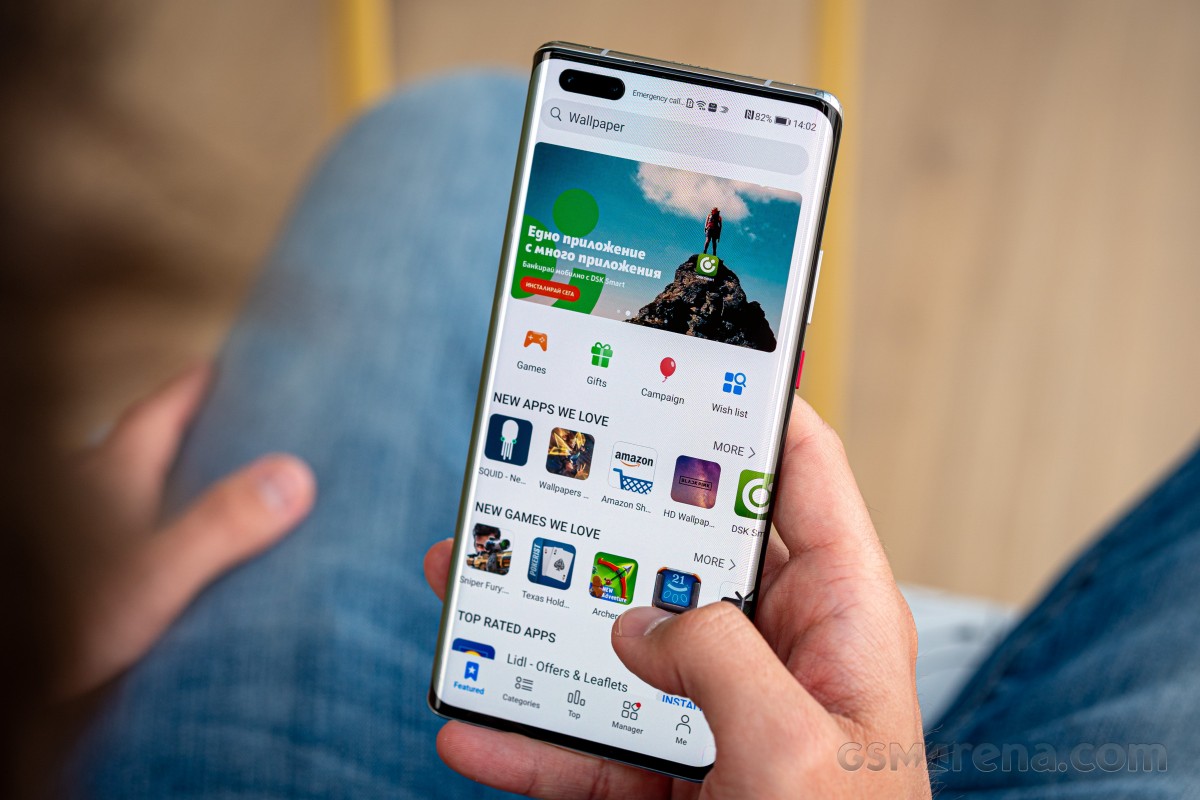 Similarly to the P40 Pro, you have two biometric options for unlocking the Mate 40 Pro. Both fingerprint and 3D Face Unlock are available and both can work side by side - whichever happens first. We had a very pleasing experience with the optical reader in terms of speed and reliability and it's up there with the best available.

Meanwhile, the face unlock is based on a 3D scan coming from the ToF camera so it's more secure than a mere photo-based solution - so it's like Apple's FaceID. It works in the dark, it's often faster than the fingerprint reader, and it can be set to require a swipe or not (unlike Apple's). 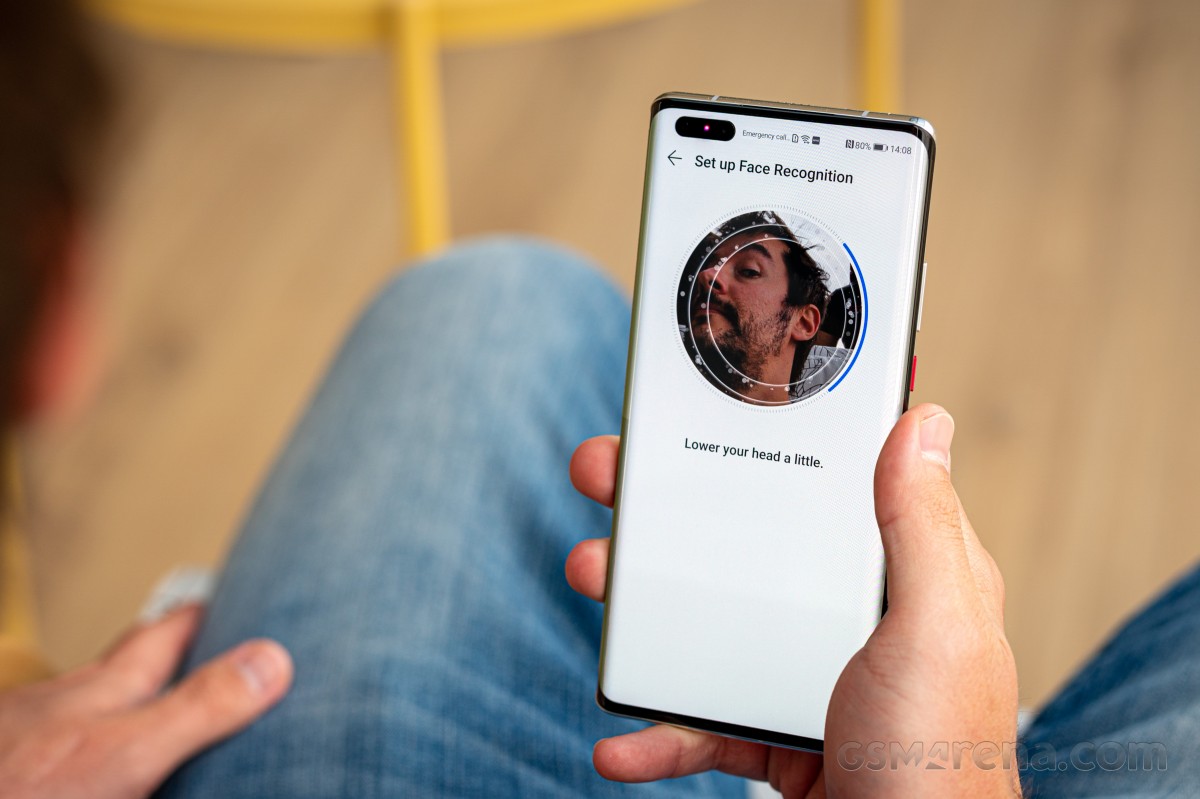 There's an AoD capability on the Mate 40 Pro and you can choose from a lot of different clock styles. Like all EMUI-driven devices, you can set up a magazine lockscreen style that changes the picture every time you wake up the screen. Sliding from the bottom will bring out quick shortcuts to some commonly used utilities.

On the homescreen, you will find all of the installed and system apps, but there's a toggle in the settings menu that lets you choose between the standard layout or a homescreen with an app drawer. It's a personal preference, and it's good to be able to choose.

There is a replacement for the Google Feed in this version of EMUI, and it's called Today. On this leftmost page, you will find a Search field, shortcuts to favorite contacts, photos, etc, and a News Feed filled with local news through a service provided from Huawei.

It's quite the cutout that the Mate 40 Pro has to house the front-facing camera tech. If you find that to be an eye sore, there's a provision in software to mask it with a black status bar, though that could make for a way thicker status bar that you'd like. A good alternative is to just switch to Dark mode - The OLED screen makes for inky blacks and the cutout disappears into the darkness.

While the waterfall display is certainly cool, you could end up in a situation where one app or another has UI elements at the very edges and they end end up out of sight, or inconvenient to operate. For those apps you can disable the strips on the two sides so that the app only fits within the flat portion of the display.

The Mate 40 Pro adopts the notification shade design we saw on the P40 bunch where we noted it had been redesigned. We're now familiar with the circular toggles and blue accent color for the On state, very much like on Samsung's One UI and sort of like Google's own Android 10 design. There's a brightness slider (but no auto toggle in immediate reach) and a row of toggles upon the first pull, and you pull down again for more toggles.

Multitasking is handled in a standard way (unlike, say, in Xiaomi's MIUI) - with a horizontally scrollable rolodex. The task switcher allows for split-screen or pop-up mode. Most of the default apps support pop-up view, but only few can get into split-screen and we found that odd.

The Mate 40 Pro uses the OS navigation that's gotten the de-facto standard for the industry. You swipe up for Home, swipe up and stop midway for Task switcher, or swipe from the left or right edge of the screen for Back. You can opt for the classic virtual buttons, of course.

What's more intriguing is the set of Air Gestures enabled by the 3D ToF camera. You can take screenshots by hand grab, swipe up and down to scroll, or left and right to navigate the gallery, as well as pause and play music by 'pressing' the air in front of the phone. We rarely had much luck with those when specifically testing them, but they could potentially be useful if you're eating a particularly juicy burger, maybe?

Another feature we stumbled upon is the auto UI rotation based on the front camera(s?) reading. If you leave the phone on the table lying flat - so no gyro or accelerometer involved, it will rotate the UI to match the direction you're looking at it from. While convenient, it perhaps raises privacy questions - does that mean the phone is constantly looking at you?

Other bits of custom software in EMUI include the Optimizer app, where you can access shortcuts to storage cleanup, battery settings, blocked numbers, Virus scan powered by Avast, and mobile data usage.

Huawei's Music app offers a way to listen to stored MP3s, and it also includes Huawei's own music services in compatible regions.

Same goes for the proprietary Video app - it plays your local videos, but it also includes Huawei's video streaming service similar to YouTube. Huawei has partnered with BBC to deliver more interesting content in addition to all funny and creative videos you will find within Huawei's own streaming servers.

Huawei's Health app is pre-installed, and it offers step counting, among many other things. There's a file manager app and a note-taking app.

The gallery is an entirely custom job, too, but it has the usual chronological and albums views plus an AI-powered highlights selection.

We're happy that Huawei continues to include an IR blaster on its phones. Thanks to its Smart Remote companion app, you can control all of your legacy non-connected appliances with your phone.

The lack of Google services and consequently support for some key apps from Google itself and third parties has been a pain point for Huawei and its phones for a couple of generations. The Mate40 Pro is no different and the app support and app store situation is unchanged from the P40 Pro times.

To get yourself started, you can also use the Phone Clone app, which will copy everything from your old phone including all installed apps except for Google's (and some banking apps). The thing is, going that route means you won't get future updates to these apps automatically.

It's not like there aren't app stores, really. Huawei's App Gallery is the primary one and it has a lot of the apps you'd want, though obviously not all of them. Third party stores can accommodate your app needs too. APKPure works great for free apps and games while its Store page with paid apps just links to the Play Store which obviously won't work on the Mate. Then there's the Amazon App Store - it has plenty of the popular apps - both free and paid. There's the caveat that no matter how you source some apps, they simply won't function without Google Play Services.

Alongside the Mate 40 series, Huawei announced the launch of its Google Maps replacement - Petal Maps. While it didn't pop up in the AppGallery on our review unit, we checked on the P40 Pro and that one had it, so we played around a bit. It finds businesses and restaurants and whatnot, but its database is not entirely complete and there are outdated business names and some are missing entirely - at least in our neck of the woods, that is.

Another issue is that traffic data is incorrect, showing all green everywhere, when it's demonstrably not the case - it's one thing to be able to source your numbers from everyone with Google Maps on their phones, entirely different with Petal Maps. It's still a very clean interface and a pretty good opening effort from Huawei, we'll give them that.

If you're really contemplating living without Google services, it could be worth checking out the P40 Pro review for a bit more detail, or our dedicated article where we explore what apps can be found on what store, and what works and what doesn't.

It's so funny to read this "and pretty much whatever app your heart craves" (iphone 12 pro max).

I agree with you man its a SUPER phone!!