The Huawei P50 series may have been delayed yet again. It is believed that Huawei originally had an end of March event planned at which it would have announced the release of HarmonyOS 2.0 and the first phones to run it out of the box – the P50 models.

However, the phone launch was pushed back – to June, according to unconfirmed info – and the company didn’t want to hold back the release of its Android replacement OS. So, Huawei officially confirmed that HarmonyOS is coming in April.

As for the P50 series, Weibo users are claiming that the new launch date has been tentatively set for May. Of course, this is far from a solid commitment and can change again as the company tries to sort out its supply chain.

The Weibo users are also preparing their smartphone fantasy football game, noting the Xiaomi Mi 11 Ultra from yesterday and its 1/1.12” sensor, which is supposed to be surpassed only by P50’s 1” IMX800 sensor. That is if and when the P50 actually launches (the stats on the IMX800 are based purely on rumors too).

What of HarmonyOS then? We already know that Huawei Mate X2 will be the first device to be updated to the stable release (the foldable currently runs Android 10). With the P50 out of the running, a tablet may become the first mobile device to run Harmony out of the box – the Huawei MatePad Pro2 is listed at MIIT with HarmonyOS. 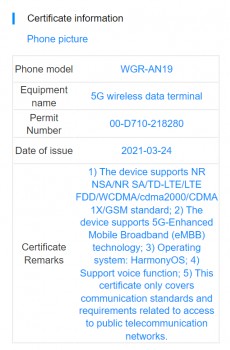 The tablet, WGR-AN19 (“Wagner”), has popped up in a few other places. From what we can gather so far, it will be powered by the scarce Kirin 9000 chipset. It will have two versions, one with a 12.2” display from BOE and one with a 12.6” display from Samsung (presumably an AMOLED). Additionally, it will support 40W fast charging, as per 3C data.

HarmonyOS will officially launch in April, the Huawei Mate X2 will be the first to get it

Yeah, in the smartphone business if they can't reach a deal with the US they have no options. They even recently ran out of chargers in their official stores in China as they contain American components so it is difficult to secure the necessar...