Counterpoint Research just posted its analysis on the Indian smartphone market in Q3. Despite the global slowdown, it managed to grow breaking the shipment record with 49 million sold units. 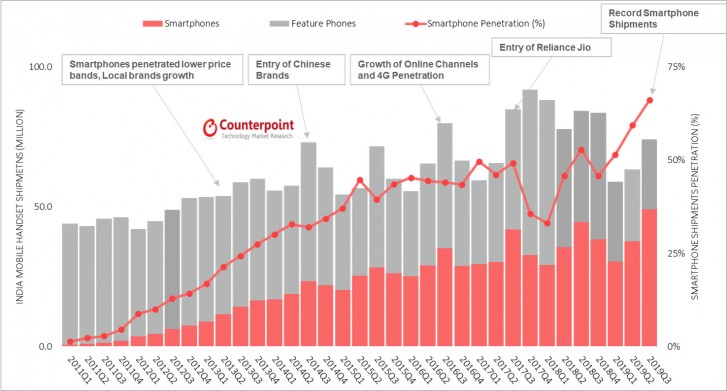 According to the analysts, the significant expansion of the portfolio of the top brands right before the Diwali festive season, which is often associated with discounts on various products, is one of the main driving factors for the record-high shipments. It appears that the Chinese brands like Xiaomi, vivo and Realme got the most out of the Q3 shopping frenzy.

Xiaomi continues to lead the Indian market with a 26% share, despite declining 1 percentage point YoY, whereas Samsung takes the second place with 20% market share - a 3pp decline year-over-year.

Vivo and Realme have recorded the biggest growth compared to Q3 2018 with 7 and 13 pp growth, respectively. Realme's numbers are particularly impressive as they mean the young company has expanded its market share by over 5 times and increased its net shipments by 6 times.

Xiaomi sold 6 million smartphones during Diwali, generates over $1B in revenue

Realme is a subsidiary of BBK along with Oppo, that's why it seems weird to me they're broken up that way, but Xiaomi is not.

It is for me. Also for most people here. Gcam port can take great photos for social account, for pro photos use a dedicated camera, they don't even cost that much. It's not like phones with OIS take photos better than non-ois phones anyway. Just th...

I'm not saying OIS is useless. It's function is reduced due to nature of wide angle, and only good for static object. Any thing moving will still be blur. It's just not many will want to pay additional for it. If you can afford it, then just get it, ...