Samsung is releasing yet another camera update for the Galaxy S20 series, the latter two of which promised to improve the autofocus performance. It seems that the company still hadn’t perfected it as this latest update also targets the camera.

The Galaxy S20 and S20+ are getting faster autofocus, which will allow them to lock onto objects more quickly as you move the phone around. Also, the security patch has been bumped up to May. 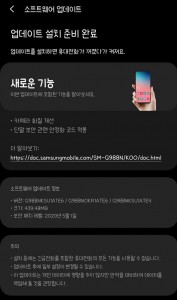 The Samsung Galaxy S20 Ultra is getting that patch as well as a dedicated Close-Up Zoom function, which is specially-designed to improve the phone’s focus performance at close range. Previously, users had trouble photographing things at a distance of 10cm or so.

The image quality of the Night mode has been improved as well. Other enhancements that are exclusive to the Ultra include a more responsive fingerprint reader and better sound quality from the speaker.

Be on the lookout for firmware version G98*NKSU1ATE6. It’s currently rolling out in South Korea, but it should expand globally soon.

I am so upset. The S20 Utlra camera is plagued with focus and images that look like a pastel painting instead of a digital picture. It is a HARDWARE issue! It can't be solved by a software update. It have gone to three tech stores and they all said...

We pay so much money for this phone. Why they did not fix it before they sell it? Samsung can not make good phones! never can. At the past have big battery problems. Now have camera problems. But we pay them good money for not good job!

Glad i returned mine. I was more frustrated with the picture quality with over saturated photos and overblown skin smoothness. A beast of a phone except for the camera. Iphone is still better with DSLR like quality photos/videos.