OnePlus is a company that has evolved in sync with the smartphone market. It releases smartphones about as fast as Qualcomm can release flagship processors. But just as smartphones in general, OnePlus phones have gotten better in quality.

The OnePlus 3 was the first company smartphone with a quality build, the first to feel like a "Never Settle" product. It was released in true OnePlus fashion, packing the best in must-have tech available - the new 821 chipset, a great display, a great set of cameras and an impeccable finish among others. 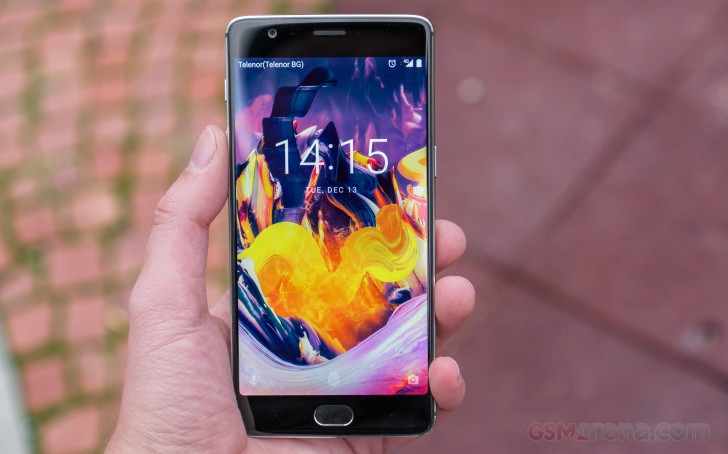 The OnePlus 3T looks identical to the OnePlus 3 although it's a shade darker thanks to its Gunmetal paint job. Its dimensions haven't changed, but on the inside, it has managed to squeeze a larger 3,400mAh battery and higher megapixel front facing camera.

To complete the changelog, the 3T comes with higher 128-gig storage option and a higher starting price tag - up by 40 Euro.

All the changes amount to an interim OnePlus phone, not the full-fledged flagship we've come to expect from the maker. But is that a bad thing? Read on.

We've already said this, but the OnePlus 3T is the same size as its predecessor. It still measures the same height (152.7mm) and width (74.7mm) and is still razor thin at 7.4mm.

Held in hand, the OnePlus 3T feels just as nice and just as small. If you're an iPhone Plus user, you may even wonder how this phone has a 5.5-inch screen at the front and feels so compact.

There are gentle curves and slopes on the front glass and the back of the phone that help it sit gently and comfortably in hand, but also well-defined sharp edges that give the 3T an elegant look.

The controls haven't changed from the OnePlus 3, but we'll go over them once again for those who are curious. On the left, there's a volume rocker and a three-way alert slider that toggles between Normal ringing mode, Do not disturb and Silent. On the opposite side, there's a power button and the dual-SIM slot. 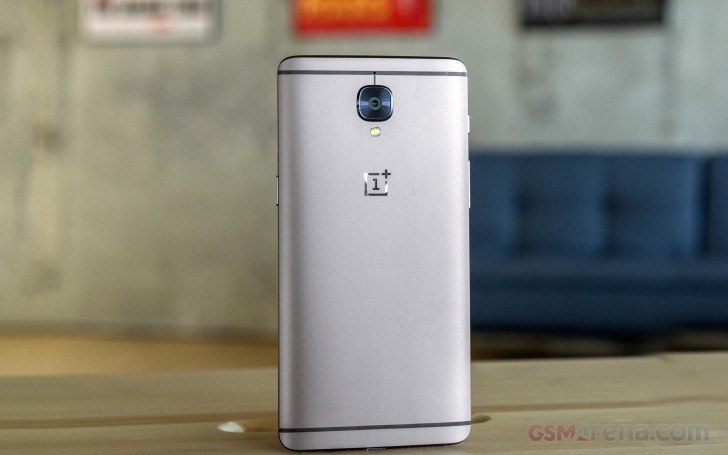 There's a non-mechanical touchpad key below the display that happens to be one of the fastest fingerprint readers around. Flanking it, are two customizable capacitive buttons that default to Recent Apps and Back.

You can choose to have only on-screen controls and not use the three capacitive keys altogether - more on that in the software below.

Our one gripe with the OnePlus 3T is its camera bulge. The lens protrudes quite a bit from the surface of the back panel.

The screen is one of the things OnePlus didn't change in the 3T, and there are good reasons for it - mainly battery life. The OnePlus 3T has the same 5.5-inch 1920x1080px Optic AMOLED that has been tuned specifically for this device.

The screen is punchy and vivid and gets reasonably bright. Being an AMOLED, it comes with the great contrast and viewing angles inherent to the technology. 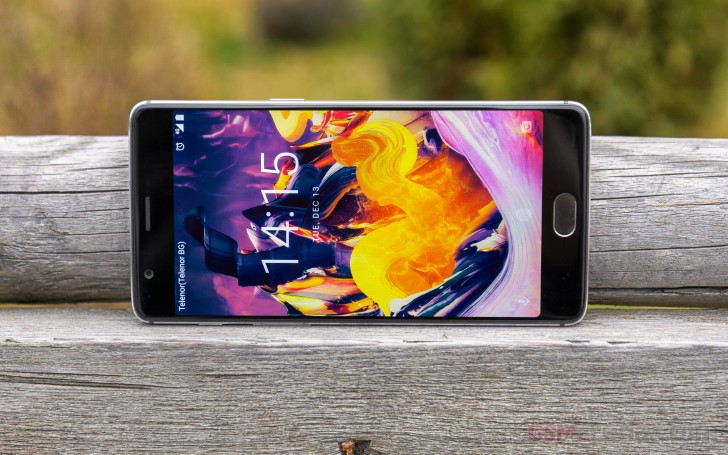 Another benefit of the AMOLED panel is the low reflectivity, which combined with the high contrast and good brightness, results in a very viewable screen outdoors.

Finally, if punchy colors aren't your thing, the 3T's screen can become much more accurate with an sRGB display mode. As accurate as it may be, it makes the lovely punchy screen muted and bland, so it's best suited for these rare occasions when you need mission critical color accuracy.

Probably the best improvement the OnePlus 3T brings over the OnePlus 3 is battery life. For many, this upgrade alone justifies the launch of the refreshed model.

OnePlus made the battery bigger by 400 mAh or 13%, which, combined with clever software optimizations, has resulted in a 25% better endurance as rated in our lab.

The OnePlus 3T improved on the 3's 66-hour endurance rating by 17 hours, most of which are due to the better battery performance in stand-by.

The OnePlus 3T shares the cool Dash Charge tech of its predecessor. A renamed version of Oppo's VOOC, Dash Charge is probably among the best fast charging protocols available on the market. Using the supplied 20W charger, you should be able to charge the phone's battery from 0% to 60% in just 30 minutes. 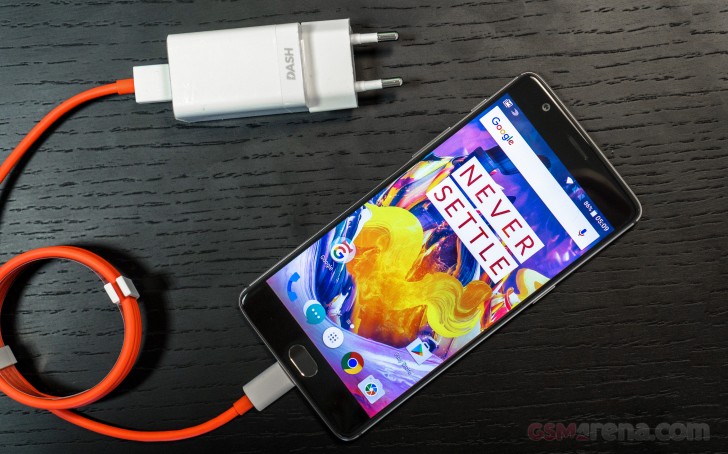 And we found the claim true - half an hour on the wall got us consistently to 60% on the OnePlus 3T - the same as the OnePlus 3, which is impressive given the 13% bump in battery capacity.

We loved the OnePlus 3T's audio quality. When coupled with an external amplifier, the OnePlus 3T is one of the best on the market, highlighted by very high volume levels.

Adding in a pair of headphones causes moderate damage to the stereo quality and introduces some extra distortion. The overall output is still very good regarding clarity but the volume dropped from excellent to merely good so it's no longer among the best performers.

OnePlus have obviously decided that the Model 3's camera is perfectly fine for another generation's time and have incorporated the same Sony IMX298 sensor into the Model 3T. It's the front-facing unit that has received an upgrade - from 8MP to 16MP, matching the main camera's resolution. 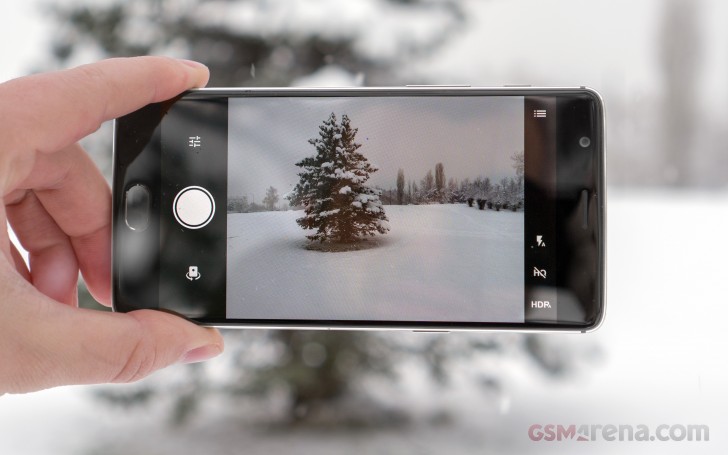 The main 16MP camera has a 1/2.8" sensor with regular-sized 1.12µm pixels and an aperture of f/2.0. The software behind the camera is clean and focuses on the basic features such as flash control, a timer and the HDR on and off toggle.

OnePlus has added an excellent Pro Mode with full manual control over everything.

Regarding image quality, the OnePlus 3T may have the same camera hardware as the OnePlus 3, but it comes with a new factory tuning. The camera processing apparently applies more sharpening and leaves more of the noise alone. As a result, the perceived detail from up close is higher compared to the OnePlus 3, so you get sharper, more detailed photos that are more pleasant looking. 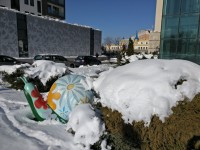 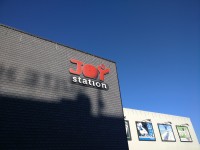 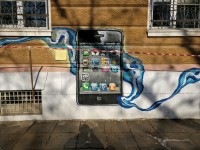 The OnePlus 3T has doubled the already high-res 8MP front-facing snapper of the OnePlus 3 to 16MP. The software behind the shooter hasn't changed at all, which is a shame - we would have loved a screen flash feature, for instance, but that's missing. 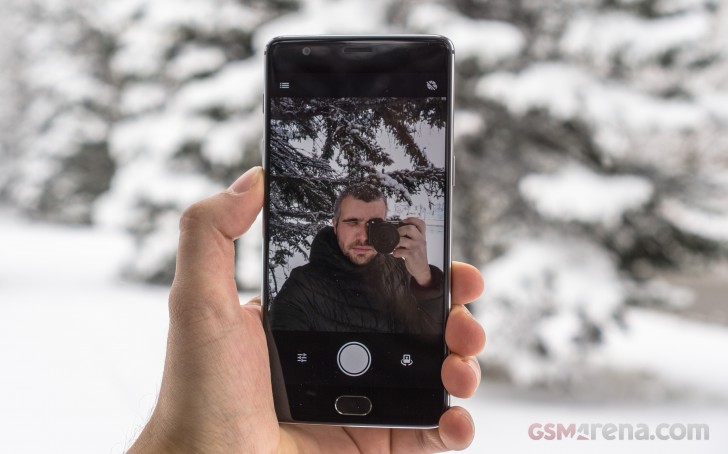 The stills themselves are much better with the new camera. Detail is impressive, and there's even a hint of bokeh behind the subject. Colors aren't very vivid, but skin tones come out natural.

The one weakness we found is the limited dynamic range - backgrounds can get overexposed for good exposure on the face - but that's true of any selfie snapper out there. 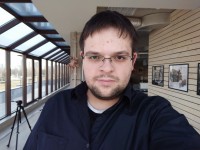 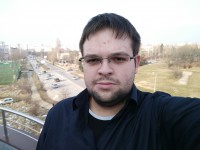 The front-facing camera is capable of 1080p video while the main one can go all the way up to 4K. Videos from the OnePlus 3T have a higher bitrate than before, and the corresponding detail is also higher.

Thanks to the new Snapdragon 821 processor there's an improved software stabilization that works great.

Just like Model 3, the Model 3T uses OnePlus's custom Oxygen OS, which is very close to stock Android but with a lot of added potential.

Oxygen OS can be visually customized in a lot of ways. You can change the background color throughout the OS from white to black, which not only gives the phone a stealthy, inky look but helps with battery life due to AMOLED's reduced power usage when showing blacks.

The accent color of toggles and the font colors can also be changed.

The leftmost homescreen is called Shelf, and it acts as a, well, shelf for the time, date and weather information, recent apps and widgets. 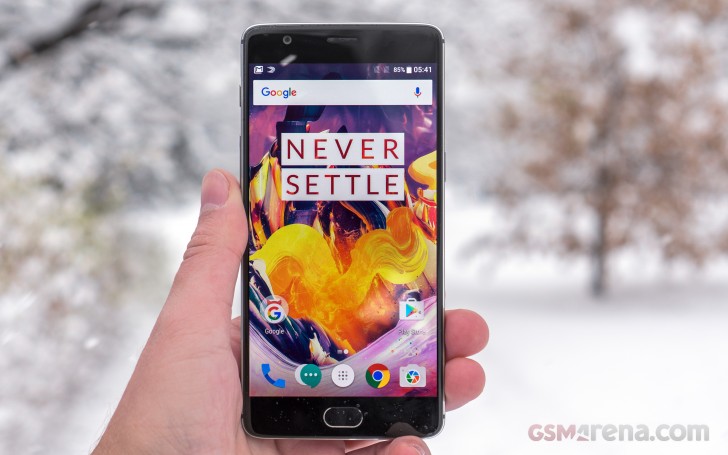 Oxygen OS also supports useful gestures both while the screen is on and off. You can draw an O from standby with the screen off to open up the camera, for instance, or V to toggle the flashlight on. A double tap will wake the screen. A three-finger swipe will capture a screenshot, and you can pull down the notification shade with a swipe anywhere on the screen.

The three capacitive touch buttons under the screen are customizable too. You can set double tap or tap and hold shortcuts for various actions (show notifications, open the camera, etc.). You can swap the Back and Recent apps or choose to use virtual on-screen buttons instead. There's even an option to use the home button only as a fingerprint reader.

Speaking of buttons, the physical notification switch on the side of the phone is a great addition. It quickly toggles through Do Not Disturb mode, completely Silent and Normal mode, which turned out to surprisingly useful in day to day use.

There are even more aspects to Oxygen OS that make using Android a better, more intuitive experience. You have full control over app permissions - for instance, you can deny an app access to your phone's storage. There's also Deep clear, a feature that can stop background processes.

And if you choose to just use the vanilla Oxygen OS, without customization, you are left with a snappy, clean Android experience.

The OnePlus 3T is one of the first smartphones to use the new Snapdragon 821 chipset, which fits nicely with the beefy 6 gigs of RAM.

The new chip is more or less just an overclocked version of its predecessor but it does make the OnePlus 3T a bit faster than the Model 3 in tasks like opening apps.

The OnePlus 3T is also higher up in the benchmark tables in both CPU and GPU tests. In fact, it's one of the best performers in synthetic tests to date.

Just like its predecessor, the OnePlus 3T is a very snappy phone. It feels like one of the, if not the fastest smartphone around but the same could easily go for the OnePlus 3.

Throughout this entire review we looked at the OnePlus 3T as an update to the Model 3 and not as a standalone smartphone, so let's try and change the perspective.

If you're in the market for a new smartphone today and you're okay with ordering it online instead of going to a brick-and-mortar shop, the OnePlus 3T is a must-consider. It has a lot of great features going for it and just a few considerations against it. The lack of water-proofing is the sole thing holding the 3T back from a proverbial gold medal. The lack of microSD expansion isn't a big deal when storage starts at 64GB.

The OnePlus 3T doesn't have the best main camera on the market but what it offers is still very good. The 16MP selfie snapper is among the best around, we just wish it had any sort of a flash - be it screen or a dedicated LED.

The battery life is great too - in line with our expectations from the segment.

Looking at the OnePlus 3T as an upgrade to the OnePlus 3, we don't think current 3 owners should sell their phones and move to the 3T, nothing major has changed.

OnePlus made a few reasonable improvements to its flagship formula that honestly make the smartphone scene a better one. It's better to have a better OnePlus flagship for a few Euro more than to not.

As for the OnePlus 4, we hope the ambitious maker has something special in store for us. We've liked every OnePlus smartphone so far, and the last two are undoubtedly great - the first to truly embody the Never Settle motto. But there has never been a OnePlus device whose main selling point wasn't pricing. We are really looking forward to seeing something special next time.

Using since its launch in Nov/Dec 2016. Been 3+yrs. Still going strong as a workhorse. Got its Camera module replaced once.. apparently common focus and zooming problems few ppl were complaining. Still happy, can sti continue until 2020 end ...

I m using it since 2 years, the very first year it was at it's peak performance, but in the second year it showed it's unworthyness. Battery back up is worse while using internet, upper left side of screen gone wild, primary camera is not sensing ima...

Best fone I received after a long,with best battery timing and with specs available in the price matching comparing to any other big names like Samsung etc. I recommend it to buy.