Chase also shared a poster on Weibo, giving us our first official look at the GT Neo3. You can see the smartphone has a rectangular island on the back housing three cameras and a flash. There's also some text confirming OIS. 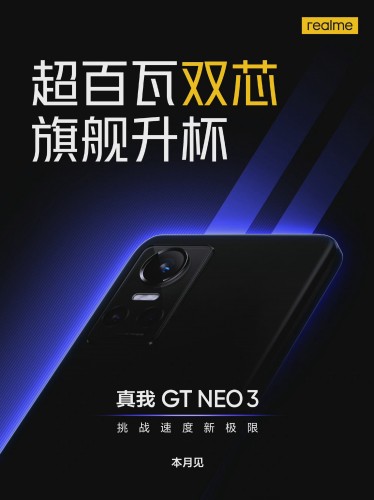 Previously, Realme confirmed that the GT Neo3 will be powered by the Dimensity 8100 SoC and support 150W charging. The company hasn't detailed the phone's specs sheet yet, but thanks to Geekbench and TENAA, we know it will come with a 6.7" FullHD+ AMOLED screen with a fingerprint scanner underneath, Android 12, and two RAM (8GB/12GB) and three storage (128GB/256GB/512GB) options.

The Realme GT Neo3 will feature a 16MP selfie camera, with the camera system on the rear comprising 50MP, 8MP, and 2MP units.

However, the RMX3560 is rumored to have the Snapdragon 888 chip at the helm, but we are yet to see convincing evidence about it.

Realme GT Neo3 tipped to come in two battery sizes, charge at up to 150W

If it will arrive in Europe in december, better don't bother. Anyway, if it arrives sooner, it deserves to be taken into consideration.

Yes, that's right. Madhav Sheth would be commenting only on global launches. It's definitely coming to China this month