Realme announced its 100-200W UltraDart charging yesterday and said that the GT Neo3 will be the first to use it as it will come with 150W charging, filling the phone's battery from flat to 50% in just 5 minutes. Today, the company revealed another key detail about the GT Neo3 - its processor. The young brand announced that Realme GT Neo3 will be one of the first smartphones to come with MediaTek's freshly-announced Dimensity 8100 SoC.

That's no surprise since rumors about the GT Neo3 coming with a Dimensity 8000-series started making rounds on the internet last year. However, some reports claimed the GT Neo3 will have the Snapdragon 888 SoC instead, which could be one of the two models spotted on TENAA recently - RMX3562 and RMX3560. The former is said to pack a 5,000 mAh cell with 80W charging, and the latter is expected to come with a 4,500 mAh battery and 150W charging. 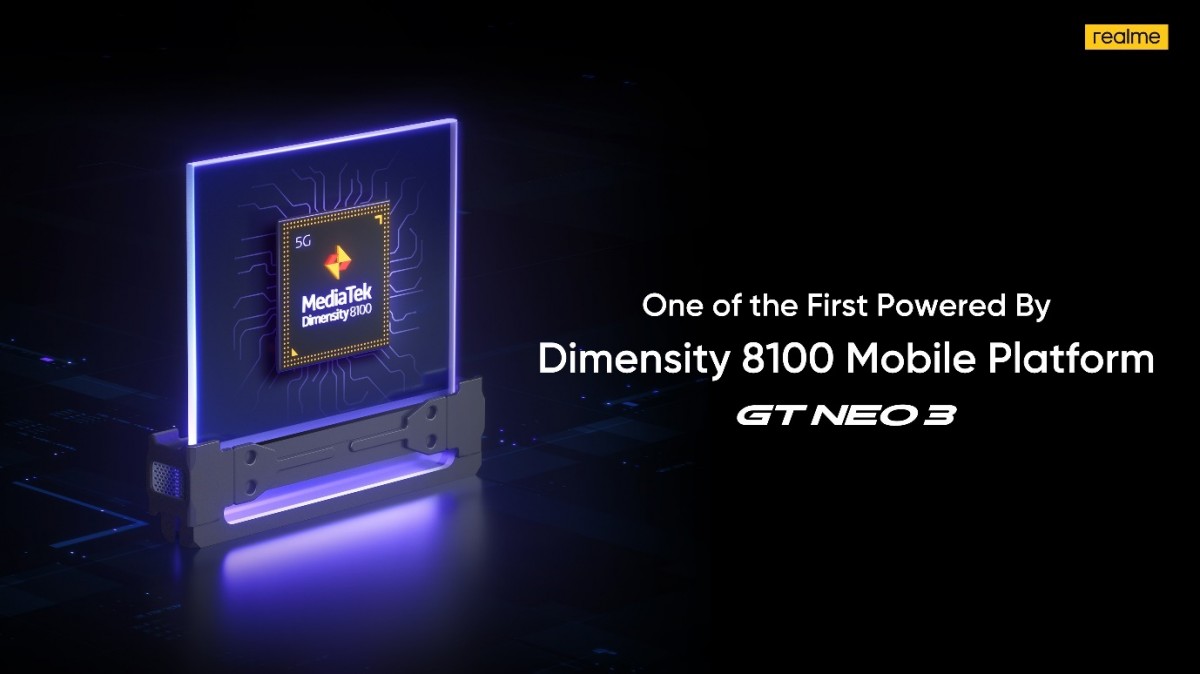 Realme hasn't divulged much about the GT Neo3, but TENAA revealed the smartphone will feature a 6.7" FullHD+ AMOLED screen, in-display fingerprint reader, up to 12GB RAM, and up to 512GB storage.

For photography, the smartphone will have four cameras onboard - a 16MP selfie unit on the front, with the camera system on the rear consisting of 50MP, 8MP, and 2MP units. A leaked render revealed the primary camera will have OIS.

Talking about the Dimensity 8100, we are looking at a 5nm chip using four Cortex-A78 cores clocked at up to 2.85GHz, and four Cortex-A55 cores going up to 2.0GHz. Graphically intensive tasks such as gaming and video editing are handled by the Mali-G610 MC6 GPU.