Realme is coming to France on May 24, with Realme 3 Pro leading the charge

From our interview with Realme’s CEO we learned that the brand will launch in Europe by the end of June, but it seems that was a conservative estimate – Realme is coming to France in just a couple of weeks. Invites were sent out for an event in Paris, scheduled for May 24.

Since the invite prominently features the Realme 3 Pro, it’s a sure bet that the current top phone of the family will be part of the launch line-up. The Realme X, a higher-end phone with a pop-up camera and Snapdragon 730, will be unveiled on May 15, so it might be featured at the Paris event as well. 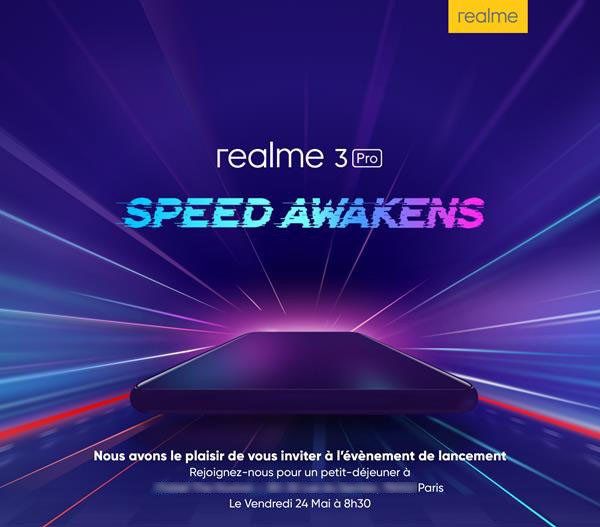 Chances are that France will be only one of several countries that will be part of Realme's European expansion. We’ve heard Spain and the UK mentioned, but we’re yet to see any official confirmation.

We’ve reviewed the Realme 3 Pro, it's up against the likes of Redmi Note 7, Honor 8X and Galaxy M30. Since these phones are already available in India (and Europe for the most part), this is an expansion of the fight for best value-for-money phone.

Hello...Realme please publish what carrier aggregation bands you support ! Dont dissapoint us in France by not supporting the LTE CA bands here

This is a good news