Samsung Galaxy S7 edge comes with a 12MP main camera (4:3 aspect), compared to the 16MP (16:9) snapper on the Galaxy S6 series. The field of view is not as wide as on the S6 on the horizontal but the S7 edge captures more when it comes to the height of the scene. 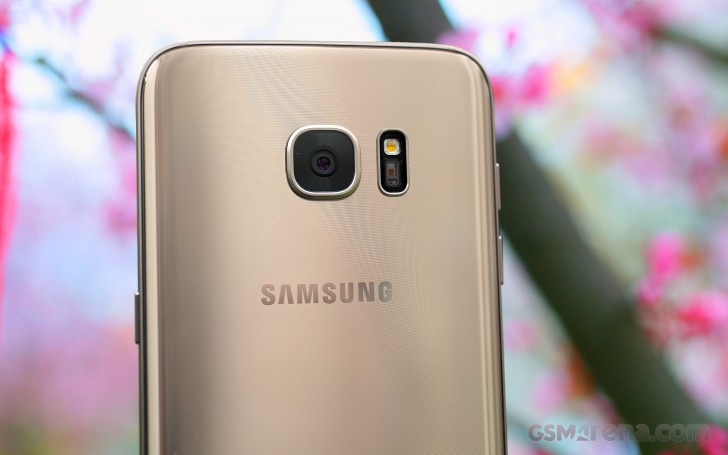 Samsung used completely new hardware for the Galaxy S7 edge camera though. The sensor packs fairly large 1.4µm pixels and it sits behind the brightest aperture on a phone yet - f/1.7. All this is designed to collect more light and coupled with OIS it makes for great low-light shots.

The image sensor features Dual Pixel focusing - it's a Phase Detection autofocus, but Samsung claims it's four times faster. And it is, we tested that too and it ran circles around the iPhone 6s. The S7 edge does great whatever the scene, focuses instantly, and gets it always right. It's a real pleasure to observe the AF in action. 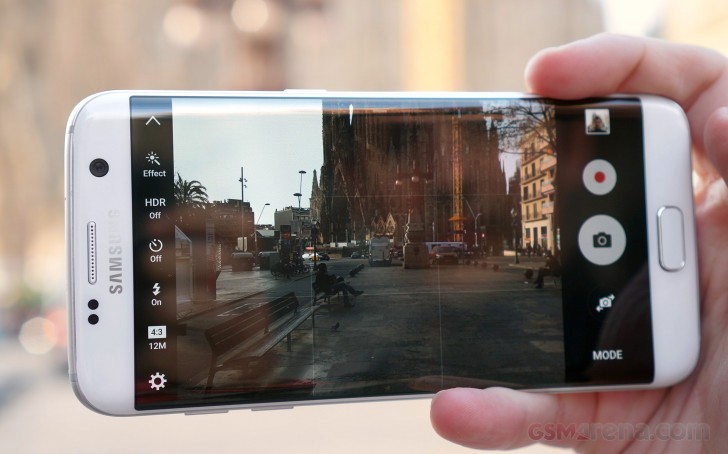 The one thing the 'S' series in still handing on is the single-LED flash. It's powerful, but maybe a dual-tone flash may turn for the better in few scenarios. Still, with the big pixels, wide aperture, and OIS you'll hardly need to use the flash anyways.

Update (03 Feb 2017): The Android 7.0 Nougat update for the Galaxy S7 edge is here and we've covered the differences in-depth in a dedicated article. Those include some key changes in the camera app, which now relies more heavily on swipes instead of taps. Be sure to read it for a more current perspective on the camera UI. For more info on the original Marshmallow-based interface, continue reading below.

The camera is quick to launch and shot to shot time is lightning fast. The available shooting modes include panorama, selective focus, video collage, live broadcast, virtual shot, slow-motion, hyperlapse. There is also a manual mode (Pro mode) where you can tweak ISO, shutter speed, focus, white balance, exposure, among others.

Motion photo is available, too - it captures a three-second video before you've pressed the shutter and embeds it within the .jpg file. Upon the release of the phone, you could only view the videos on the device itself, or on other S7/S7 edge units.

Today, a few updates later, you can share the still image or the video separately with virtually anyone. Depending on the chosen aspect of the photo, you'd get either 960x720px or 1280x720px videos in an .mp4 format.

You can download even more shooting modes from the store such as Animated GIF, surround shot, Dual Camera, Sports.

The Galaxy S7 edge stills came out excellent, but we expected nothing short of that as the Galaxy S6 series set the bar high. The resolved detail is impressive, the color reproduction and white balance are spot-on. There is very little noise, and also no artifacts or oversharpening. Finally, the dynamic range is among the best we've seen on a mobile and we found almost no use case for the HDR or even the Auto HDR setting.

There is something Samsung could have done better though - the rendition of the foliage. It's a bit of a mashup and probably needs a finer tuning on the processing algorithm. Don't get this wrong - compared to the iPhone 6s Plus foliage, the S7 edge does an AAA job, but it's just that the Galaxy S6 edge renders it better.

Still, the Galaxy S7 edge snaps the best pictures we've seen from a smartphone camera to date and with the return of the water-protection, it's an excellent portable camera for any trip.

And here are some close-up shots we took with the S7 edge, which are equally impressive - the detail, contrast, and colors are gorgeous.

The HDR mode does a great job of lighting up the shadows and not changing anything in the highlights. Thanks to the Live HDR mode you can see the result of the HDR mode even before you've snapped the image.

The Galaxy S7 edge features much better autofocus, brighter F/1.7 lens, and optical image stabilization. Yes, we know we said that already, but do you know what all of these mean? Great low-light photos, of course!

And the Galaxy S7 edge lived up to our expectations - the low-light samples, whether indoors or outdoors, blow away the competition. Sure, you can tweak any phone on manual mode and take a shot, but it takes time and a tripod. We took all of our images handheld just tapping the shutter - no tripods, no hassle, nothing.

The iPhone 6s Plus, one of the hottest flagships around, also features a 5.5" display and a 12MP main camera. We snapped a few samples for comparison, and you can easily pick the Galaxy S7 edge as the winner. The iPhone samples are great by themselves, they are just not that good as the Galaxy's. The resolved detail and the low noise should become a signature for Samsung's flagship snappers.

The Galaxy S7 edge snapper doesn't have as wide field-of-view as the Galaxy S6 camera on the horizontal plane, but as these camera samples will show you, the level of detail is mostly equivalent.

The Samsung Galaxy S7 edge shoots panoramas with very high resolution - 4,000 px tall if you hold the phone upright. The software and the fast chipset make shooting very simple, you just start panning in one direction.

The resulting images are rich in detail and aside from the moving cars, there are no major stitching artifacts. The resolved detail is as impressive as on the 12MP stills, as is the dynamic range and produced color.

The Galaxy S7 edge is equipped with a 5MP front-facing camera, which has a similar F/1.7 aperture and offers Live HDR and color filters as well. It has a 120-degree WideSelfie mode, so it can easily capture group selfies. You can snap selfies with a tap on the heart-rate sensor on the back of the phone.

The resolved detail is about average, as is the dynamic range, but the colors and contrast are great.

Here's the Samsung Galaxy S7 edge in our Photo quality comparison tool, where you can pit it against the Galaxy S6 edge, the iPhone 6s Plus, among others. The Galaxy S7 edge camera easily aces all tests and becomes the champ in the low-light scene.

The bright f/1.7 lens and bigger pixels allow the S7 edge to capture the dark sample with an ISO as low as ISO 200 and a shutter speed of 1/100s. There is very little noise and it's really hard to tell the low-light sample from most of the competition's samples from the brightly lit scene.

The Galaxy S7 edge can capture video in 4K (2160p/30fps), 1080p/60fps, 1080p/30fps, as well as the less common 1440p/30fps and lesser resolutions. From the shooting modes you can select slow motion video (720p/240fps), and Hyperlapse. The latter isn't at a fixed speed, instead the S7 edge analyzes the footage and uses a variable speed depending on the action or lack thereof.

1080p/60fps is the one area we experienced some issues with focus hunting, apparently the S7 edge thinks that since we're using the higher framerate, we must be following some action closely. Other than that, videos are smooth and detailed, perhaps with a little noise in the darker areas. At 30fps the focusing is calmer and doesn't give us any reasons to protest.

Finally, you can use our Video Compare Tool to see how the Galaxy S7 edge stacks against the competition when it comes to video capturing. We'll give you a hint - it's a bar setter.

so thats the issue with 7 edge I wondered why the rapidly lost of charge and overheating without use or charging ,blinking screen every so often as well ,my phone fried yesterday .i was given a s8 $99 insurance charge .i was asked if i ever droppe...

yes, i am running it on Android 8 now.