On this page we're launching into the monetary stratosphere so we'll change tactic. Instead of talking of specs and disadvantages, we will be directly comparing phones against their closest rivals - to get the best flagship, you need to get one that's better than all the others, right? 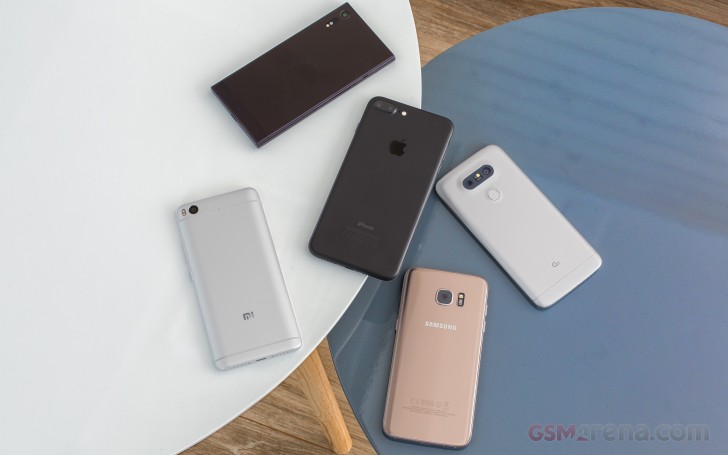 Let's start with the obvious - the iPhone 7 and Galaxy S7 will split the majority of premium smartphone sales between them. But which one is better suited to your needs?

The iPhone 7 is now water resistant (IP67) and has stereo speakers, its screen is one of the very best, its chipset is the best, the camera is quite impressive though Panoramic photos and HDR are still better on the iPhone 6s. The Galaxy S7 also gives you a bigger screen (an AMOLED), a microSD slot and a headphone jack (yes, that's something to worry about these days). You'll get more out of S7's battery, but it will have to wait longer between major OS upgrades. Both Samsung and Apple are pushing their own mobile payment systems around the world.

The situation for people who want a bigger screen is much the same - Galaxy S7 edge vs. iPhone 7 Plus. This year Apple feels closer to Samsung in terms of feature load than ever before, but Apple rarely settles for first when it can be the best instead.

Let's do another pair! Google specifically priced its Pixel phones on par with the iPhones, let's see how that pans out. iPhones often get admonished for costing too much for what they offer, but compared to the Pixel XL, well, the iPhone 7 Plus just offers more.

Okay, okay, no headphone jack but Apple's accessory ecosystem moves faster and often offers higher-quality products than Android's, so iPhone users will be fine. Even the headphone adapter included in the retail box works well enough.

But hey, only Google's phones offers split-screen multitasking if that's something you'd like to have. And there's the promise of Google's Daydream VR experience, which Apple really doesn't have an answer to (yet!).

This doesn't look too good. Okay, let's try the LG V20 instead. It too has a wide/telephoto camera setup (16MP + 8MP vs. 2x 12MP) and its selfie camera is a sort of 2-in-1. The sleek metal shell of the V20 is shockproof to a MIL-STD-810G rating, perhaps the kind of damage more likely to occur than unplanned dives in a pool.

At nearly the same physical size, the LG squeezes in a 5.7" screen that has a friend - the Always on secondary screen. It's helpful even when the main screen is on, serving as a shortcut bar to speed up notifications. And since we talked about accessories, in some regions the LG V20 will come with a pair of pricey Bang & Olufsen headphones (check before you buy though).

Did you know that HTC built the Google Pixels? Let's see how the HTC 10 stacks up against the smaller Pixel. Things look more balanced, though HTC put two OIS systems on its own phone - one for the main camera, one for the selfie cam. And it gives you a dual speaker system plus a dedicated headphone amp, so it wins over music buffs.

The Pixel (and Pixel XL) use the first batch of Snapdragon 821 chipsets. However, they are downclocked from their nominal speeds to ones that match the Snapdragon 820. We'll have to do extensive benchmarks, but somehow we don't see it as a huge boon to performance.

We can try other combos too. One could argue that the Moto Z Force is one of the best Android around, but one will have trouble finding it outside the US. So, we're forced (heh) to use the regular Moto Z for this comparison. Can it beat the LG V20 to become the non-Samsung Android to have?

Let's bring Sony into the game as well. Currently, the Xperia XZ is its top flagship, the true successor to the beloved Z-series. Is the XZ the hidden gem that people miss when they buy a Galaxy S7?

The Xperia XZ is waterproof (IP68), a Sony tradition, but now so does Samsung. The XZ is still ahead thanks to its stereo speakers, but somehow the once-lauded Sony battery life has faded. And despite constant iteration, the Xperia camera lacks things like Dual Pixel autofocus (Predictive Hybrid AF works well, just not as well) not to mention OIS (replaced by an admittedly solid EIS).

This page would have been littered with comparisons against the Galaxy Note7, but we all know what happened there (well, not what caused it, but the end effect is the same). The Galaxy S7 edge had to step in and it did a fine job - it's still a best-seller for Samsung.

Still, it's an age old warning - once Sony, HTC, even Nokia flew high, now after a series of missteps they are eating humble pie. So plan your next step carefully Samsung, the world is watching.

Hello folks, I know it's not really updated but please give your input on deciding what phone to buy: My LG G flex 2 died recently warranty is over, so need a new one, I'm thinking about one of these, their prices are in EUR: redmi note 4 X: 16...

i cant freaking believe the huawei nova is not on this list, firstly you HAVE to see the core processor itself work, its so FREAKING EFFICIENT,secondly that display and the design makes it look posh, thirdly,that camera is capable of being a 16mp , i...

Alright after the comments fighting i came to conclude some points about smartphones. first, i was looking for a phone at the 400$ price range and i came to choose the Honor 8 here's why .. maybe i can make you feel better buying it .. before ev...