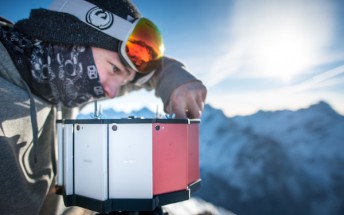 4K simply isn't enough for Sony anymore. After having launched the world's first smartphone with a display that can sometimes show 4K content (the Xperia Z5 Premium), the company is now aiming even higher. Much more so.

Sony is now boasting about having created the world's first "48K" 360-degree video. This has not been achieved using some yet-unreleased camera technology or anything like that. In fact, the company has used no less than 12 Xperia Z5 Compact units at the same time - all of which were placed inside a custom 3D-printed rig.

The 12 phones covered the entire 360-degree range, and each one was recording video in 4K. Sony has arrived at the "48K" count by simply multiplying 12 by 4. The resulting "48K" 360-degree can be seen above. For best results, make sure you watch it in a Google Cardboard-type viewer, using the YouTube Android app.

Even if you don't employ such a setup, you should still be able to "look around" inside the interactive video by using the four navigation keys that show up in the top left. The footage was shot at the Rise Ski & Snowboard Festival in Les Deux Alpes, France.

The PlayStation 5 will have a completely redesigned user interface

Who am I? A smart person with common sense. What sony did is no different from using a single camera and rotating it 360 degrees. You can only see one camera's view at a time. Ofcourse they can say it is 48k. 12x4 48. But that's not how pixels...

yes definitely your level of of ignorance is disturbing... if sony says its 48k then its the truth... they dont say nonesense.. who the hell are you that im gonna believe you? just a nobody... jealous of sony

The weakness of most of the Android devices maker is the very short software update support. If Sony can take advantage of this by providing life time support until the hardware limit, for sure Sony will be the leader.