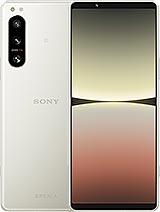 Anonymous, 01 Oct 2022This or the iPhone 14 Pro?The iphone is more expensive, and in my opinion if you have an android phone get this, if you have an iphone get that, unless if you need to do something that can't be done with your current OS

why don't you make the phone screen 19.5, like the other manufacturers, it depends on the aesthetics of the phone and it looks better before, they were much more beautiful than 21.9, the phones are good as specified before I was doing sony but now I don't like it anymore since I'm with phone screens like this, the only minus that I don't like about sony anymore

Alpha, 28 Sep 2022Right, because all other SD 888 and SD Gen 1 phones are ice... moreIm pretty sure all other android phone alternatives do worse and throttle more or overheat more.

Just look up stress tests of the alternatives offered in the rev.
Xiaomi throttles more, Asus throttles less but overheats much more, Sammy is not even worth mentioning in that department.

Xperia 5 IV seems to be among the best at thermal throttling in its class of android phones.

Alpha, 28 Sep 2022Right, because all other SD 888 and SD Gen 1 phones are ice... moreA Software update that cuts its performance less than half of it.
So better buy cheap china phone with low grade chip. It has the same performace with xperia.

Anonymous, 26 Sep 2022& the result is overheating & throttling. 🤣Right, because all other SD 888 and SD Gen 1 phones are ice cold on full performance, Sony at least reduced the heat with software updates!

It's a pity that Sony is not using Snapdragon 8+...
Can actual users verify the heating issues of 5IV?

Anonymous, 04 Sep 2022it's not brand new if you've opened the box and t... morethat is the used price putz, anyway sold !

Sony phones are one of the best smartphones and I think xperia 5iv better than S22, 13 mini and many other compact phones. But it's overpriced. It offers almost the zenfone 9 but though it's far way expensive than zenfone 9. I have been using Sony but I can't take this anymore so I'll move to Asus

And this happened again with the Mark 3 & 4 series on their SD888 & SD 8G1, which's highly regrettable, but with other flagships botching MicroSD slot, 3.5 mm headphone jack, notification LED, pinless card tray, and shutter button that I need from a smartphone, of course, my next phone will be still Sony.

Imagine if they used 8+ gen 1, that throttling would be reduced and battery life will be even better. It will be a phone to keep for years to come. But you buy this one and in few months a TSMC one is released and it will be hard to justify not upgrading.
If it had TSMC chip it would be a phone of lifetime for many.

TheGoldenMellifluous, 24 Sep 2022Dude, Sony doesn't have any habits on putting the mid-... moreBut they should have got out of their way to use TSMC chip, it would really make the phone worthy of consideration. What were they thinking that they miss out something so critical? Yes, using TSMC instead of Samsung is mission critical and doing otherwise is suicide, at least in current circumstances.

And if you're correct then upcoming pro model would get 8 gen 1! I'm sure that's the only reason that phone will fail! Sony, why do you keep digging your own grave and why do you keep stabbing yourself?

TheGoldenMellifluous, 24 Sep 2022Dude, Sony doesn't have any habits on putting the mid-... more& the result is overheating & throttling. 🤣

Anonymous, 23 Sep 2022ye... i agree... my xz2 compact can have 8hrs sot... whil... moreTrue. Im charging to 90% (battery care) and I have stamina mode that activates on 25%. Sony has one of the best battery life on the market. Sony made lit-ion batteries for first time for consumers on 90' (Sony was the first company that made Lit-ion battery and bring that to consumer market - they made ~15 bilion batteries in Sony history), Stamina is technology from camera department (first devices was on the market 15-20 years ago).
There is many liars here. Fake competition from Xseromi and others.

Starting with the next year Sony Xperia will become almost the perfect phones! With the same stats and the new processor! Just can't wait for the time to pass quicker! Till then the Xperia line is still the only one to go with if we don't like holes in the screens and the lack of 3.5 audio jack and sd card. Cheers

Anonymous, 07 Sep 2022Just 3 months to go till 2023 yet Sony still using old over... moreDude, Sony doesn't have any habits on putting the mid-cycle update version of Qualcomm's fastest chipset every year (the plus version) for some reasons (probably had to do with unification). The only time they did mid-cycle update version of Qualcomm's chipset was in 2013, where Xperia Z had Snapdragon S4 Pro meanwhile Z1 had the newer Snapdragon 800. After that, they consistently using the first version of the fastest chipset available every year and never the updated version, for example:
Xperia Z3+ & Z5 both SD810,
X Performance & XZ both SD820,
1 & 5 -> both SD855
1 IV & 5 IV -> both SD 8G1
And if you think 1 Mark V gonna use SD 8G1+ instead SD 8G2, that's just not gonna happen at all. It certainly gonna be 8G2 from these patterns alone.