How much storage is enough? Our poll shows a nearly even split between 64GB and 128GB. Of course, this doesn’t mean that there’s no more need for a microSD slot – photos, music and videos fit there just fine, they are not performance-sensitive like apps and games are.

Some argued that those are best left in the cloud, but most agree that the carriers are not ready yet. 4G LTE is fast unless it isn’t – and it’s usually the latter. Then you lose 4G connectivity or run out of data. Not ideal, the Nextbit Robin was ahead of its time.

Anyway, very few people voted 256GB and up. These will be the people who lug around big FLAC collections, movies and more. Not an issue, 256GB phones are becoming more common and we’ll be seeing 512GB phones before long. And microSD went up to 400GB this year. 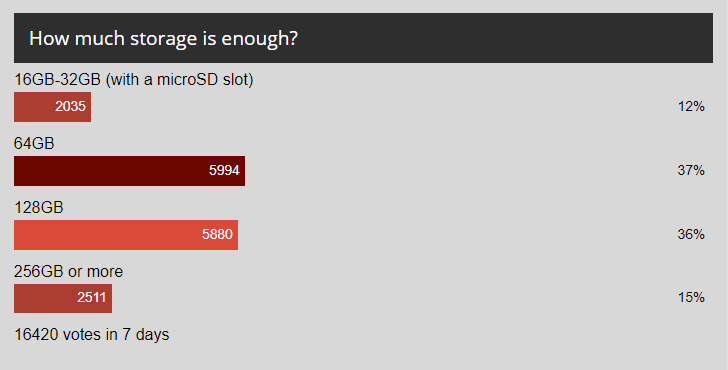 512 gb is not enough.1 TB of phone storage is enough.Where else will i stash the 18+ videos when net neutrality comes ? The additional 10 TB of PC storage is also included.

If you don't have power or internet, then you can listen to some music on your phone if you really need to. You won't need more than a few hundred songs anyway. Or you could watch a movie or maybe two. Still not a lot of space needed. Point is...