ZTE is announcing nubia V18 with dual cameras on March 22 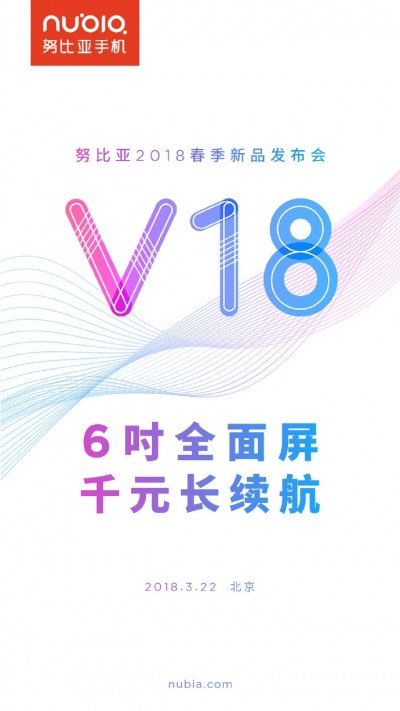 Back at MWC 2018, a nubia representative said that its phones will come with stock Android in the future. Although units sold in China will still be on nubia UI, we might see the first device poised to make the switch when it arrives at the global market.

The name is nubia V18, and it is scheduled to debut on March 22, when the company will hold an announcement event in Beijing.

The image says 6” screen for a thousand bucks, revealing the upcoming price of the phone would be around CNY1,000 (€127/$158). With such a price tag the phone is expected to be a decidedly low-end affair.

Still it might not be too bad as the way the number 8 is written points to a dual-camera setup on the back or front (or why not both).

The nubia V18 launch will be one of many scheduled in the last days of March. Meizu is introducing the E3 midranger on March 21, Vivo is launching the V9 a day later while Xiaomi and Huawei will have their events on March 27 for respectively the Mi Mix 2s and the P20 flagship series.

android one? ...if yes nubia would be considered as a phone to buy ...else remember Nubia Z17? great phone BUT ...software is trash, only for China market although cell bands are supported for europe usage