Update: The Android 8.0 Oreo update is now rolling out to Galaxy S8 and Galaxy S8+ units across the UK. It's a 600MB update, which includes the November security patch and major improvements to Bluetooth stability.

This close to launch, there are no new features to speak of (save for the option to hide the notification of "Apps running in the background"). There are, however, plenty of bugfixes, check out the official change log below: 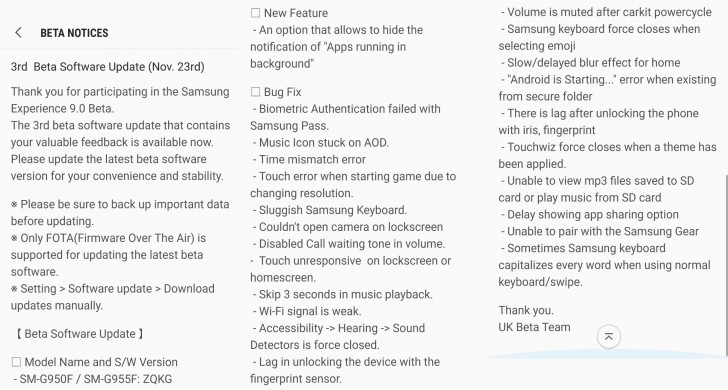 The original story follows below:

Looks like Samsung Galaxy S8/S8+ users who are part of the Oreo beta group may soon get to test the third beta build of the Android 8.0 firmware. The information comes courtesy of a Samsung representative who is part of the company's UK Beta Team.

In the rep's own words, the update will be released "very very soon."

The beta program is currently limited to the UK, US and South Korea. The second wave of countries that'll get access to it include Germany, Spain, France, Poland, India and China - no info on exactly when will that happen though.

Final version of Oreo for S8 not gonna release prior to the release of S9 !!