If you were expecting the Huawei Honor 9 to be a total departure from its predecessor, the Honor 8, then you're certainly in for a disappointment. Huawei's sub-brand has decided to keep the winning formula almost intact for this year's flagship. As a result, the Honor 9 looks incredibly similar (almost identical, in fact) to the Honor 8, and it comes with specs that are pretty close too.

We know all this because TENAA has certified the Honor 9 for sale in China recently. That means a list of most of the phone's specs is now out in the open. 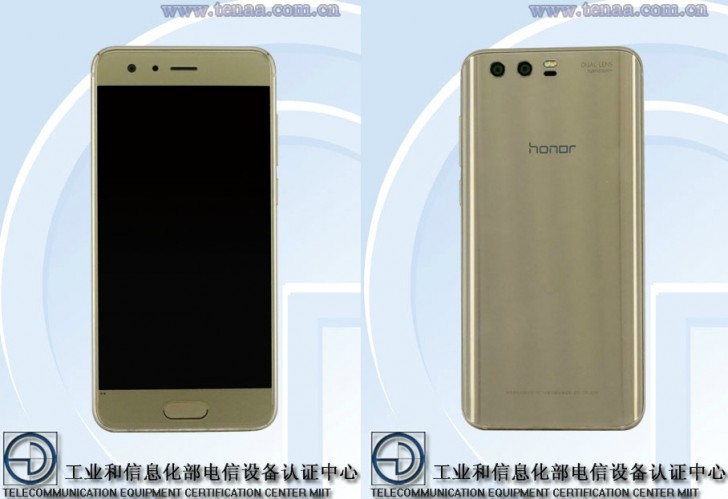 The Honor 9 could very well be confused for an Honor 8, as you can see, but there is one difference between them in looks. On the back, the dual-LED flash and laser autofocus windows are vertical in the Honor 8, and horizontal in the Honor 9. That's about it for obvious changes among generations.

That means this is one of the big areas where the Honor 9 has been improved. Gone is the Kirin 950 chipset, and in comes the Kirin 960, previously seen on the P10, P10 Plus, and Mate 9. So for the first time the Honor flagship will be on par, chipset-wise, with Huawei's top of the line devices.

Furthermore, the Honor 9 gets 6GB of RAM and 64GB of expandable storage, the former a 2GB bump compared to the Honor 8. The battery capacity is mildly improved too, now being 3,100 mAh. The Honor 9 runs Android 7.0 Nougat underneath EMUI. Its rear camera setup consists of a 12 MP + 20 MP dual arrangement, while an 8 MP snapper is on the front for selfies.

Honor Band A2 unveiled: now with screen and a heart rate sensor

You can consider p10 because it's really a nice phone. Your have a nice name by the way..

And yeah bit from my understanding that was the case with Honor 8 as well. Until some people noticed it was not getting all the notifications until they put it on performance mode which drastically reduced battery life. And still.. more capacity is a...