Huawei’s launch schedule has become irregular, but the company did confirm that it plans to launch the Mate 50 series eventually. The latest leak on the topic shows renders for the three main phones and a new tablet, plus a collection of rumored specs. Note that these are highly speculative and could prove to be wishful thinking.

The phones will reportedly also feature an NPU from HiSilicon for the XMAGE processing, an in-house replacement for the camera tech co-developed with Leica.

Speaking of the camera, it is said to feature a switchable aperture – f/1.4 and f/4 – for the 50MP main cam. On the Mate 50 Pro and Mate 50 RS that should be an IMX800, on the vanilla model it should be the IMX766 instead. All three models are expected to have a telephoto lens, but its specs are unclear, same goes for the ultra wide. As for the selfie camera, it will be a 13MP unit with a 3D sensor for face unlock on the Pro and RS models.

All three phones are expected to use 66W fast charging for the 4,500mAh batteries on the Pro and RS (plus wireless charging), 4,400mAh on the vanilla model. 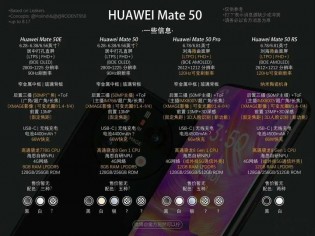 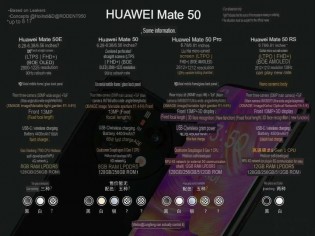 The Huawei 50 RS model will have a ceramic body as its main selling point, the other two will feature a metal and glass sandwich build.

The rumored specs include a fourth model, the Huawei Mate 50E, which is similar to the vanilla model, except that it will use the Snapdragon 778G chipset (again limited to 4G connectivity). 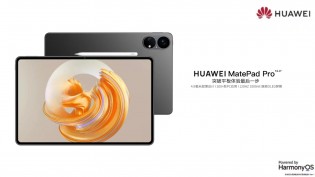 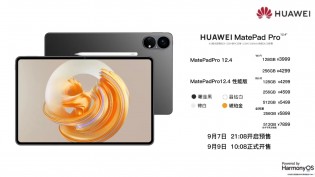 It’s not clear what chipset will be used for this one, but it is split into a base model and a Performance Edition. The 11” Pro had two versions – one with a Snapdragon 888 and one with an 870, we will probably see something similar with the 12.4” tablet. The third version listed features wireless connectivity, 4G only if we had to guess.

Will Huawei unveil the Mate 50 series alongside the MatePad Pro 12.4” next month? It’s possible, but there have been relatively few leaks about the Mates until now, so it is far from guaranteed. Again, all this information could prove unreliable - we will have a better idea about its validity in September when we see if the MatePad details are confirmed.

So sad to know that huawei phone will no longer be equipped with kirin chips😞 man i love those chips they were so optimized nd faster,

Huawei has finally caught up with the rest of the market by making a phone look just like the 2017 Samsung Galaxy S8. Truly innovative design.

hey thanks for the info it definitely will help many of us here in making a wise decision & i personally will choose a huawei myself so can u please kindly tell me of up to how many zoom can the p 50 do is it a total of up to200digit...