The LG V10 has a lot going for it - it's a flagship, a phablet, a camera phone, a rugged phone, a Hi-Fi phone and the first of the new V-series. It's a feature-packed device and its signature feature is the secondary always-on display and a dual selfie camera.

LG issues a serious challenge to other makers on the camera and audio battlefields with the V10. The phone is also LG's first to feature a fingerprint reader since 2009's GW820 eXpo (not counting the Google-designed Nexus 5X).

The LG V10 is an exercise in rugged design and premium engineering. The chassis, which LG has dubbed Dura Guard, is built out of 316L stainless steel (which is harder and heavier than aluminum). Stainless steel is covered with chromium oxide and when scratched, the chromium underneath reacts with oxygen from the air and heals the scratch, preventing further damage.

The second part of the equation is Dura Skin, an elastic, silicone-like material that is twice as resistant to scratches as plastic and 10x better than aluminum. Anyway, if you were hoping for some LG bezel magic, the V10 doesn't deliver. It fits well enough in the hand for its screen size and given its size the weight doesn't feel overwhelming. Still, it could have been more compact and a lot lighter.

In the hand the V10 feels big, though manageable. As we saw earlier, it's on the higher end of the size spectrum for a device with a 5.7" screen and the stainless steel frame contributes adds extra width, which does have an effect on handling. LG's trademark back button arrangement is back, but with a new member joining the team. The Power button (that splits the volume buttons) is now also a fingerprint reader and it works quickly and reliably.

The screen below that Gorilla Glass 4 is a 5.7" Quantum display. Besides that the LG V10 has a small secondary screen strip above the main screen. The secondary display can be left on 24/7 and serves for notifications and shortcuts.

On paper the screen of the LG V10 seems to be powered by the same technology as the one on the LG G4, but it actually has a higher contrast ratio (1490:1). The maximum brightness level is somewhat lower (432nits vs 532nits) but the black levels are much deeper resulting in the improved ratio.

Going outside in the sun, the LG V10 screen offers above average legibility at max brightness. 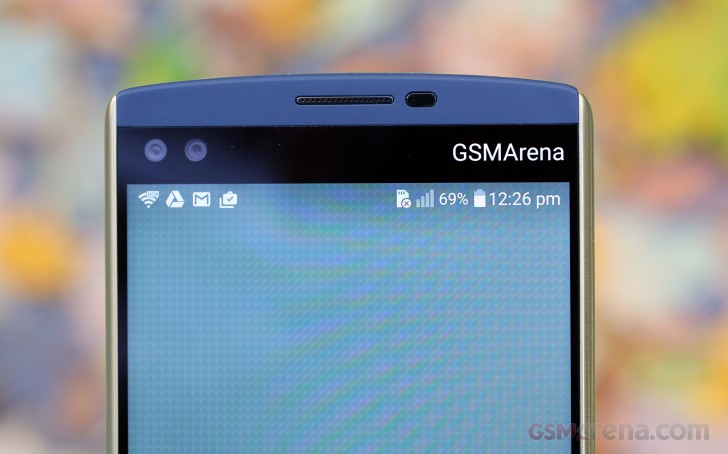 In terms of color accuracy, the G5 screen grabbed good overall scores though its color output is certainly not at calibration level.

The smartphone packs a 3,000mAh battery - the same as the LG G2 and G3 before it. The battery itself is user-replaceable thanks to the removable back cover.

LG rates the V10's talk time at 18 hours and about as much, close to 17 hours. Even the G2 did better than this. The web browsing and video playback times are average. Nothing spectacular when you consider the screen was at a modest 100 nits (well below average). As a result, the endurance rating works out to 56 hours, just over two full days. The standby power draw is fairly low, but that's with the second screen off. Turning it on brings the LG V10 down to 46 hours endurance rating.

It's a good thing that the LG V10 offers quick charging out of the box. A quick top-up should provide you hours of extra use.

Such usage pattern may not be relevant to your own usage scenario, but we've established it so our battery results are comparable across devices. You can adjust the formula to better match your own usage patent, by visiting our dedicated battery test results page.

The speaker on the V10 proved average in loudness and with certain ringtones it is downright quiet. You'll need to pick a loud, distinctive ringtone. The middling loudspeaker isn't great for listening to music either.

The LG V10 produced perfectly clear output when connected to an active external amplifier - there wasn't a single one of its readings to be anything other than excellent. The volume wasn't particularly impressive, but it was still just above average so we certainly liked what we saw here.

Plug in a pair of headphones and you get some extra stereo crosstalk and a bit of intermodulation distortion. Both readings remain very good for the case though so the overall clarity is rather pleasing. Volume levels do drop a bit though and that means the V10 wouldn't be particularly comfortable handling high-impedance headphones. Those aside however, the LG flagship did a very good job here.

It's optically stabilized with optional digital stabilization. OIS helps not only for video shooting but also when the light is low. The V10 has a few more tricks - Laser autofocus for fast, accurate focus locks and a color spectrum sensor that promises accurate color (white balance) rendering even in tricky lighting situations.

The image quality is highly impressive. Photos are exceptionally rich in detail and sharp from edge to edge. Colors are fairly accurate, with the extra noise being the only potential issue on a few occasions. The dynamic range is quite good as well.

The dual selfie cameras are quite interesting too, one offering wider field of view than the other. We find the innovative concept great and the image quality is fairly good, though noise reduction hampers their performance and colors come out washed out.

The 4K videos are smooth and the image quality is excellent - there is plenty of detail, little noise. The colors are identical to the still photo camera, accurate save perhaps for the reds.

Videos come out sharp and thanks to the advanced mic system, the V10 also captures superior sounding audio.

The user interface of the LG V10 makes great use of the second display and the interaction with the LG V10 starts before you even unlock the phone. The secondary screen in the top right corner is always on and it shows time and date plus notifications. Quick toggles for the volume, Wi-Fi, Flashlight and Camera are a swipe away.

Besides that, however, the overall user interface hasn't changed that much from the company's previous flagship. The app switcher itself is the standard 3D rolodex of app screenshots. The homescreen holds no surprises either. The Smart Bulletin on the leftmost pane should be familiar to Optimus UI users. It's a sort of mission control that gives you one look access to LG Health, your Calendar, the music player, QRemote, Smart tips and Smart settings. 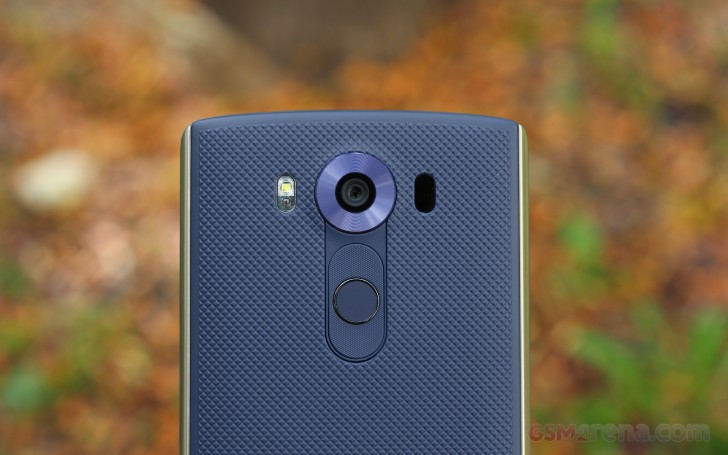 The LG V10 is based on Android v5.1.1 (Lollipop) and an update to the more recent Marshmallow is yet to be announced.

Update, Mar 12: We would like to make it clear that the score in this section is based on a number of factors such as how recent the version of Android is, how likely the phone is to get frequent updates to future major versions, how well the built-in biometric security feature works for unlocking the phone, as well as on the amount of meaningful extra features and customization options offered by the manufacturer on top of the vanilla Android. This comes to clarify that if you consider yourself to be an Android purist who likes their clean stock Android, the scores in this section most probably won't be completely relevant to your preferences. A Nexus device is unlike to score the highest here.

The LG V10 went with the Snapdragon 808 found on the G4. The chipset is not flagship grade even though it's coupled with 4GB of RAM by default.

Still, the processor does fairly well - two Cortex-A57 cores at 1.82GHz and four A53s at 1.44GHz come close to the Snapdragon 810 setup in performance even those the latter has two extra A57s cores. Both single and dual-core performance by the V10 is quite close to that of the S810-powered LG G Flex 2.

Snapdragon 808 is fine for general use, the processor can handle itself quite well. It's the GPU that doesn't quite work at the flagship level. Maybe if Qualcomm had a version of the S808 with Adreno 430 things would have been different.

A perfect time to strike then. The LG V10 brings fresh energy and starts a new family line. The V series stands for practicality, durability, and innovation. It's shock proof to a military standard. It's not waterproof like the Xperias, but it's a difference as small as the difference between 'every day' and 'vacation time.'

The LG V10 is an attractive, durable phone with great specs, it comes with useful feature you can't find anywhere else and LG didn't overprice the phone (like Sony and HTC often do). We feel that the company will move many units, though some murmurs from South Korea suggest the market's initial reaction says otherwise. Regardless, LG has made a great phone and deserves the pat on the back.

I have used it for a year but now its battery dead without any precaution. what can I do?

some talk about screen burn thru .. close all open windows ... as you kinda see them back there .. When you open more ..

I bought this phone in 2018 in December three months after the phone blacked out and its no longer functional the same thing also happened to the LG g3 I had getting the v10 lg products are gud though am forced to keep away from them because they alw...