Samsung Display has made the decision to sell Ultra Thin Glass (UTG) to other smartphone makers (meaning other than Samsung Electronics), reports ETNews. Until now it held UTG back to give its sibling company an edge as Galaxys were the only foldables to use this type of glass (which is superior to plastic).

However, Samsung Display decided that the Galaxys have enough of an edge to stay on top, even if competing devices have UTG, and that it would rather expand its business (and that of partner Dowoo Insys) than maintain the exclusivity. Right now Samsung is the sole supplier of UTG.

Google is name-checked in the report, which suggests that the foldable Pixel will use UTG and a flexible AMOLED panel from Samsung. An earlier rumor claimed that it will have a disappearing under-display camera too, just like the Galaxy Fold3, possibly using the same tech that was demoed recently. 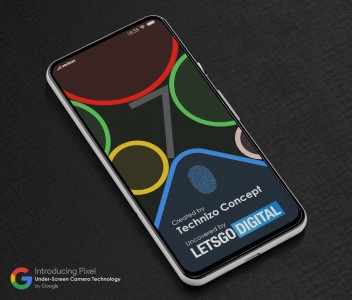 A concept rendering of a foldable Google Pixel (image credit)

The plan is for Samsung Display open up access to its UTG supply in the second half of this year, but Google may not be the first to jump on board. Rumor has it that other companies (Xiaomi and Huawei, allegedly) have expressed interest in UTG as well.

This is a similar path to the one taken by Samsung Display’s Super AMOLED panels – initially exclusive to Samsung devices to make them stand out, these panels are now available (and in fact quite common) on other brands as well.

Samsung understands it's role in the mobile space will shrink going forward. Manufacturing the devices provides increasingly lower margins as competition increases. Better to be the one selling the parts and patents to everyone than trying to as...

What's the point oh having a glass under a plastic that is not removable? It is scratchable, and it is crackable, it's got the worse part of glass and plastic.