By now the upcoming Galaxy S8 has leaked so much that there’s little left that we do not know. But all those rumors are a bit of a mess, so a few days ahead of the official unveiling, we thought it would be helpful to make a clear summary of what’s to come.

There’s no more “edge”, both versions will have a dual-curved screen. The difference in size remains 0.4” between them, but the new models have bigger screens - 5.8” on the “small” Galaxy S8 and 6.2” on the bigger Galaxy S8+.

The Super AMOLED screen has grown wider - 18.5:9 aspect ratio instead of 16:9. This squished the top and bottom bezels to a minimum. The side bezels were already close to non-existent thanks to the edge screen design. It’s not quite a match for the Xiaomi Mi Mix, but it could beat the LG G6 in bezel minimalism.

There’s no room for it on the front and no time for it to go under the screen. So the fingerprint reader is on the back, on the opposite side of the heart rate monitor relative to the camera. Not the most convenient place to reach (LG already took a shot at Samsung for it) and smudging the camera is a real possibility.

Facial recognition is a new addition to the biometric security gadgetry. This is different from the iris scanner (also present) and will serve to secure Samsung Pay transactions and more.

Reports came out that Samsung hoarded all Snapdragon 835 chips (which are made at Samsung plants). For a while, the S8 duo will be the only access to Qualcomm’s latest powerhouse. Early benchmarks show improvements multi-core and GPU performance, but the Snapdragon 821 is still pretty capable.

Samsung’s own Exynos 8895 will power some units (non-US ones) and it could offer even better performance - it’s down to whether Samsung or Qualcomm did a better job of customizing ARM’s cores.

The Galaxy S8 duo will switch to a new “Samsung Experience” skin. It has a minimalist style and uses on-screen buttons - Galaxys were some of the last proponents of hardware buttons, even the tablets had them. 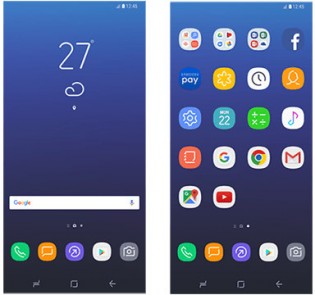 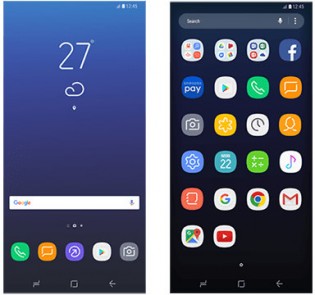 Screenshots of the Samsung Experience homescreen

Bixby - Samsung’s digital assistant - will play a big role in the new interface. Samsung has had S Voice for the longest time, but Bixby will bring more personality and features to the table.

One of the things Samsung will not change is the camera - all current rumors point to pretty much the same hardware. The 12MP module with a bright aperture, Dual Pixel AF and OIS was quite capable, but even if it receives software updates that improve image processing, it will still have to compete with dual camera phones (the majority of 2017 flagships seem to have a dual cam setup).

It seems that the selfie cam will be bumped to 8MP (from 5MP), we haven’t heard of any other major changes to it.

The front is light on bezels, but aside from that the Galaxy S8 will not look very different from its predecessor. This includes an all glass front and back, mounted to a metal frame. It will keep the IP68 certification - dust-proof and waterproof up to 1.5m (for 30 minutes).

Capacity is mostly unchanged - we say “mostly” because the plus-sized model lost 100mAh (now at 3,500mAh) while the base model remains at 3,000mAh. We don’t have any solid information if the fast charging (both wired and wireless) has been updated.

The latest information on the matter points to €830 for the Samsung Galaxy S8 and €930 for the Galaxy S8+. Pre-orders will start in early April, brick and mortar stores will receive stock around April 21. Note that pre-orders should ship earlier than that.

Samsung will market a dock alongside the Galaxy S8 - the Desktop Experience or DeX will be similar to Continuum of Windows Mobile. It will add multiple full-size ports and a desktop UI so you can use the S8 as a desktop replacement.

Breaking news: Digitimes: Samsung and LG aim to reduce their reliance on foreign organic material producers! I knew that Samsung and Lg oled are just quantity, not quality. If you want proof, here is the website: http://www.oled-info.com/digit...al...

What happened to your writing, GSMA? I've been a fan for over a decade, and this is the first month I'm so disappointed, as it seems like you're writing what people want to hear. First of all, thanks to 10nm the SD835 accounts for about 30% less...