Today, Samsung released an infographic, showing the evolution of its Samsung Galaxy Note series over the years in celebration of the market launch of the Samsung Galaxy Note9. However, Samsung’s discontinued Note7, which quite literally went up in flames, was apparently not “History Worth Noting”.

The original Galaxy Note had a huge 5.3-inch screen with S Pen, dual-core CPU, 2,500 mAh battery, and an 8MP main camera. This would be the beginning of the phablet-era, whose massive sizes blurred into mainstream phones of 2018. After all, it’s been a while since we’ve heard the term “phablet”.

The Note2 was an even larger 5.5-inch screen. It had a larger 3,100 mAh battery, quad-core CPU, 720p resolution, and the S Pen from the Note2 introduced the Air View feature that we still see on the Note9 today. 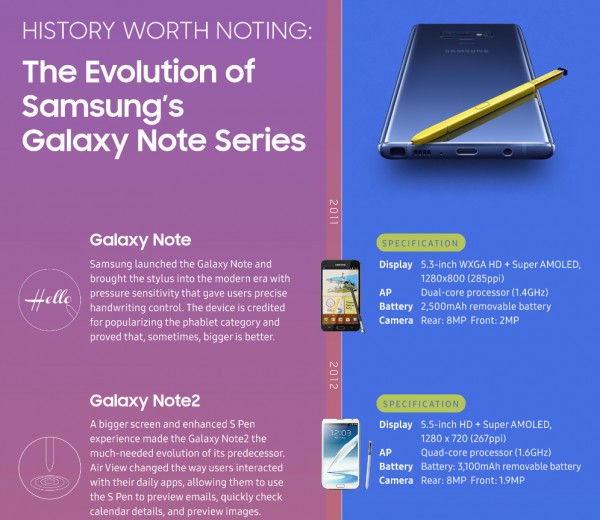 The Note3 brought an even bigger display: 5.7-inches and it was the first 1080p Note, as well as the first LTE-enabled Note. There was a 3,200 mAh battery and a 13MP camera. The Note3 was the first device to introduce Air Command, which showed the user shortcuts to apps to take full advantage of the S Pen.

The Galaxy Note4 was the first to bring fast-charging and a fingerprint sensor was embedded into the home button, though it was that one you had to swipe your finger on. There was a 3,220 mAh battery and a 16MP main camera. The Note4 was also during a time that Samsung exhausted using so much plastic in its devices and the Note4 had a sturdy metal chassis with a bevel cut around the frame. 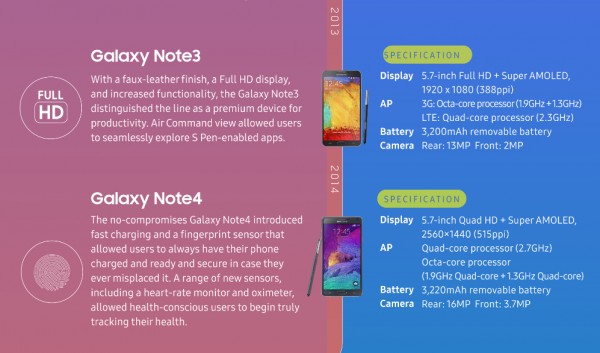 I actually forgot about the Galaxy Note Edge. It had just been released when I used to work as a Samsung rep in Best Buy on a retail level. The Edge was the phone that defined Samsung’s curved edge displays before eventually making the curve a standard part of its flagships.

This was the last Note device to have a removable battery and this one had a smaller 3,000 mAh battery since the edge display took up so much space. The Note Edge also had a very deeply pronounced edge.

Samsung decided to skip a "6" altogether so that the Galaxy S and Note lines wouldn’t have staggered numbering. This is when Samsung launched the Note7. The timing on the two things was juxtaposed in such a way that this infographic skips the Note5 and goes all the way to the Note8. 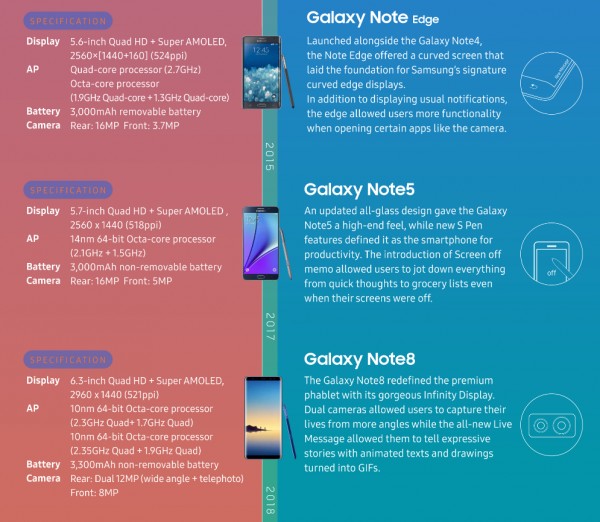 Since Samsung didn’t bother to mention it in the infographic, we’ll tell you that the Note7 was the first Samsung phone to have an iris scanner as a biometric security measure that was secondary to the fingerprint. It was also the first Samsung Galaxy Note to be fully water-resistant. At the launch event, Samsung even was eager to show the media that even the S Pen could even work while the Note7 was submerged under water. The Note7 was also the first Note to have an HDR-supported display. 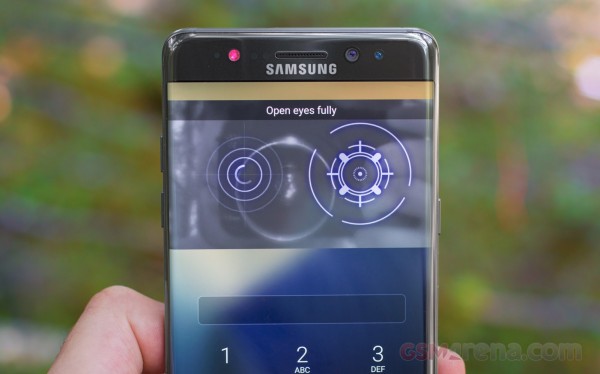 The Note7 was also the first Note to be discontinued soon after launch and the first to cause a smartphone recall from a major OEM on a global scale due to batteries igniting and becoming a safety hazard and even lighting a Jeep on fire.

Finally, 2018’s Note9 has the largest battery ever in a Note: 4,000 mAh, the largest display ever at 6.4 inches, a Bluetooth-connected S Pen with remote feature, and the first to have stereo speakers. 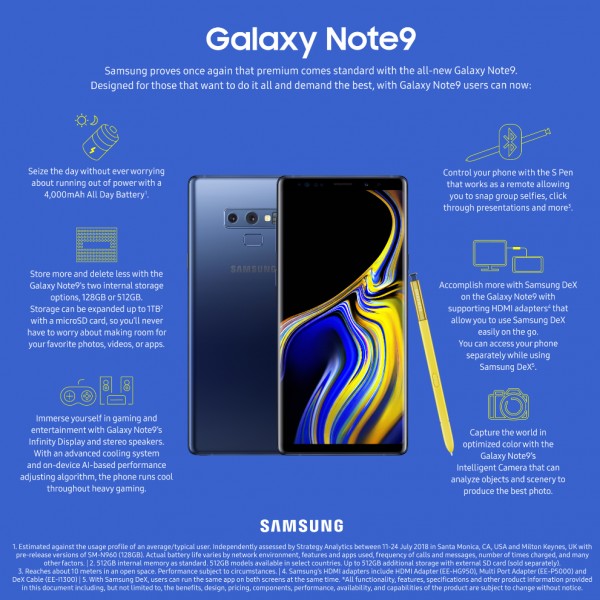 Which of these Galaxy Note devices have you owned or were you considering at some point? Let us know in the comments!

Florida man’s Jeep goes up in flames because of Note7

Noting as Jotting Down.. the S Pen!

They mis-spelt "History Worth Nothing"