But times have changed, and Sony has rolled with them. The Xperia X Compact is not as much about being a tiny flagship as it is about being a Compact Xperia X - the same blueprint, shrunken down. It carries the defining characteristics of its bigger counterpart like the Snapdragon 650 chipset, the fingerprint scanner, the 23MP camera and the front-facing speakers but comes with a smaller display of lesser resolution and, of course, a smaller footprint.

Most makers already seem to consider phones with 5"-5.2" compact enough and it's very hard to find flagship-grade specs on a phone that has a screen below 5" - making the Compact club a pretty exclusive one.

Naturally, a smaller phone has its drawbacks - it can either be slim with a smallish battery or have a larger battery at the expense of a thicker body. With a thickness of centimeter the Sony Xperia X Compact is the latter sort of small phone - and is all the better for it.

But Sony has managed to sneak a fair bit of flagship flair into this smaller phone like the top-notch camera and its best display technology as well as a fingerprint reader.

Sony didn't go crazy in developing the looks of the Xperia X Compact. It's a simple rectangular phone with a plastic body and sensible button and port locations. Some may scoff that the X Compact doesn't share the premium ALKALEIDO alloy of the Xperia XZ but the X Compact makes up for it with a choice of a few fabulous paint jobs (our favorite being the Mist Blue we are reviewing).

We've already touched on this, but the Sony Xperia X Compact is far from being a slim phone at 9.5mm. The added girth comes with two benefits - it houses a large 2,700mAh battery, and the 23MP camera sits flat on the back.

All the physical buttons sit on the right side of the phone - there's a large, slightly recessed power button that doubles as a fingerprint reader, a single-piece volume rocker, and a camera shutter button. 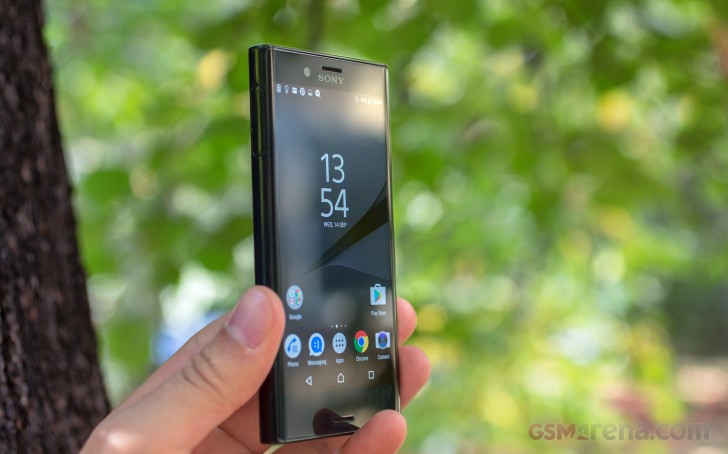 On the other side, you get a microSD card slot while, on the top and bottom, there's a headphone jack and a reversible USB Type-C port, opposite one another.

The front is buttonless thanks to on-screen navigation buttons and Sony has managed to keep the front-facing stereo speakers of the previous generation.

If we had to pick a fight with the Xperia X Compact over something that would be the omission of water resistance - this is the first Sony Compact to make a compromise on elements resistance.

Another gripe concerns the North American Sony Xperia X Compacts - they lack the fingerprint scanner of the global unit.

A compact phone is made possibly by its screen size - in the case of the Sony Xperia X Compact, that's a 4.6" LCD of 720p resolution with all of Sony's display tech built-in.

As dimensions go, this screen easily accommodates single-handed use.

As for the display technology, Sony is using an LCD with their proprietary Triluminous tech, which means the panel has a wider color gamut and can visualize a wider variety of colors than regular LCDs). The display is driven by Sony's X-Reality engine which enhances the contrast and colors of photos and videos in the gallery. 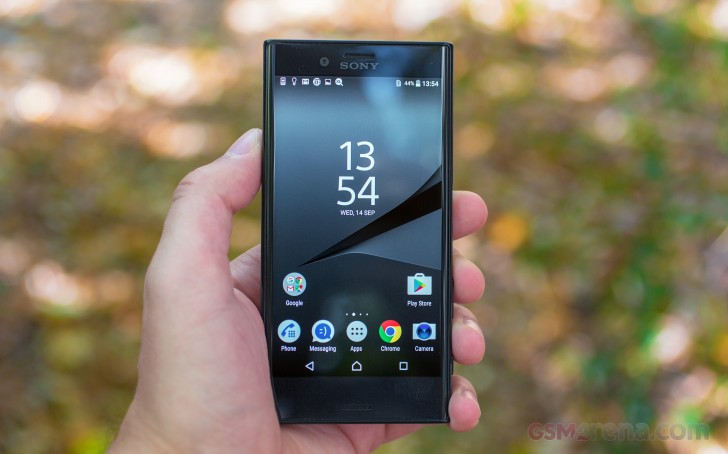 We think it's fair to say that Sony nailed the screen in the Xperia X Compact. It's about as good as an LCD can get with top-notch brightness, high contrast, and superb visibility outdoors.

The Sony Xperia X Compact has a beefy 2,700mAh battery to power its small screen and efficient processor. It didn't disappoint with a 73-hour endurance rating. That means that the X Compact will be able to go for three whole days on a charge if you do an hour of calling, web browsing and watching video per day.

The breakdown is this - in our battery life test the Sony Xperia X Compact was able to last 14 hours of constant calling, 11 and a half hours of browsing the web and just under 10 hours of watching video. Couple those numbers with an impressive standby time and you've got very good battery endurance.

On the software side the Sony Xperia X Compact comes with support for Qnovo adaptive charging, which minimizes battery cell damage by monitoring and adjusting charging parameters in real time.

The Xperia X Compact supports Qualcomm Quick Charge 3.0 (and retroactively 2.0) meaning it can recharge almost 70% of its battery in just 30 minutes on a supported charger. You can also improve the battery runtime if you use Sony's Stamina mode battery saver feature.

The only thing the Sony Xperia X Compact lacks is wireless charging.

In terms of audio output quality, the Sony Xperia X Compact did greatly in the active external amplifier part of our audio quality test. The smartphone's output was clean and its loudness above average.

Plugging in a pair of headphones brings the volume down and adds some intermodulation distortion. Stereo quality worsens somewhat too but remains good, but overall the performance is only average on this occasion.

We usually are big fans of front-facing stereo speakers, but the ones on the Xperia X Compact are only commendable on their placement. They aren't very loud nor do they exhibit any particularly high sound quality.

The Sony Xperia X Compact uses the same camera as its larger counterparts - namely Sony's 22.8MP IMX300 sensor coupled with optics that have a very wide 24mm field of view and a respectable aperture of f/2.0. Autofocus is laser-assisted, and the Xperia X Compact also has Sony's predictive autofocus so it would track some slightly moving subjects. 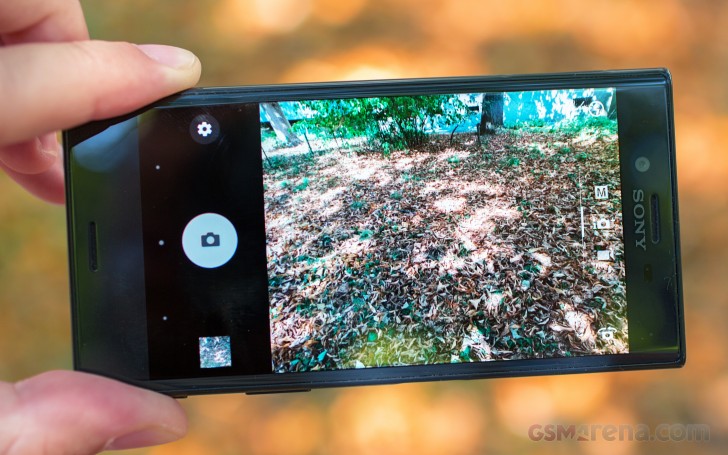 The rest of the feature list consists of a single LED flash and an RGBC-IR sensor - that's RedGreenBlueClear-InfraRed which should help the camera determine the proper white balance. Our impression is that the RGBC-IR sensor does a good job of picking a natural-looking white balance in good light but suffers a bit in lower light, opting for a cooler look that's still not realistic.

The Sony Xperia X Compact serves up detailed images, especially in good light. There aren't any phones in its range that come close to the level of detail from the 23MP sensor. Colors are vibrant and dynamic range is good overall.

Like with all other Xperia smartphones with this camera sensor, the Xperia X Compact photos don't look as hot at 1:1 magnification due to the heavy-handed processing. There is lots of digital noise visible, too, even in good light. 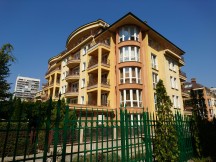 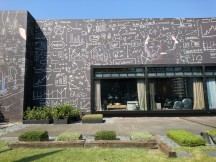 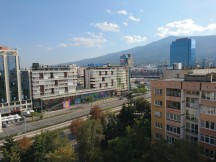 The selfie camera is a step back from the Xperia X - instead of a 13MP shooter we get a 5MP one. Still, it does an okay job and has a very wide field of view (22mm). 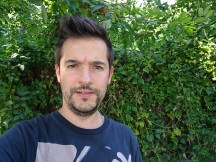 In what's most likely a business decision more than anything else, Sony has denied the Xperia X Compact 4K video recording and the phone captures only 1080p clips with a choice of 30fps and 60fps.

On a positive note, the Sony Xperia X Compact is a perfectly capable FullHD camcorder. Its 1080p videos are easily one of the best we've seen out of any Xperia smartphone.

Initially, the Sony Xperia X Compact launched with Android Marshmallow back in September, but an Android Nougat build is on its way.

Sony's software has become more and more streamlined throughout the years and has adopted a clean, close to stock look. For instance, both the Task Switcher and the Notification Area follow Android's original styling.

Of course, Sony's own style creeps in here and there with Sony's Xperia icons and the custom-look wallpapers and lockscreen. Another added feature is Xperia Themes - themes are something that's missing from stock Android. 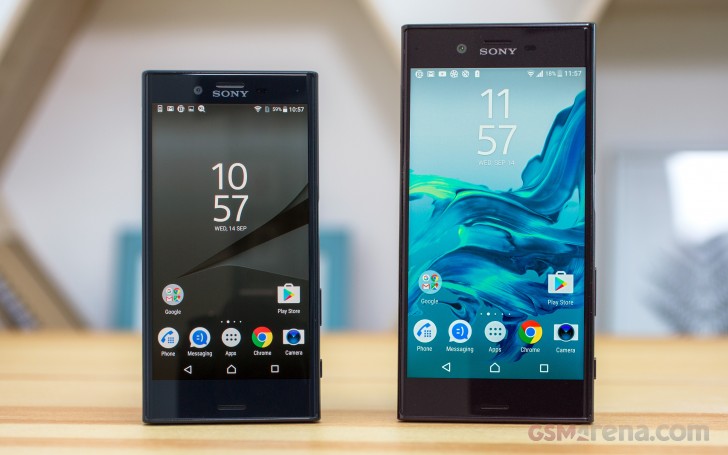 You can always access Sony's quick app search, which is coupled with suggestions based on your most frequently used apps as well as recommended Play store installs.

Sony's custom suite of multimedia apps is here - Music, Album, and Video all along with Google's own Photos and Play Music. The Sony Lifelog app logs both your fitness activity like walking and running alongside your smartphone usage like browsing for a fuller picture of your day.

Finally, Sony has a full-featured backup service that can secure your apps, contacts, messages and phone settings. You also get Sony's Stamina mode for a better battery endurance.

In the past Sony Compact smartphones were equal to their larger, flagship counterparts in terms of processing power but the Sony Xperia X Compact does away with that tradition. Instead of a flashy Snapdragon 820, it uses a Snapdragon 650. This chipset strikes a good balance between power and efficiency with two performance cores and four battery-efficient ones.

Power users needn't worry though as the Xperia X Compact has an ample 3GB of RAM.

The Snapdragon 650 is better at processing than the best-of-2015 Snapdragon 810 and only ever seems inferior to it in the graphics department. This means that the Sony Xperia X Compact will generally run faster at everyday tasks than a lot of phones from last year.

It's no secret that smartphones are now at a place where being snappy isn't an issue anymore and is all about being battery efficient. We're glad to report that the Sony Xperia X Compact runs cool and won't stutter regardless of the task at hand.

To wrap things up, the Sony Xperia X Compact is a great small smartphone. If you look beyond the specs sheet, this is one of the best small phones you can buy. It has a capable camera that, in good light, would capture photos with unrivaled detail. It's got a top build quality, an excellent screen, a snappy, well-placed fingerprint reader, stereo speakers and a solid processor.

The software is fast and has a few Sony-made apps and features that add value to the device - a great multimedia suite, Xperia themes, app search and Stamina battery saver mode. The latest Android 7.0 Nougat is on its way too.

We would sorely miss waterproofing on the Xperia X Compact - we admit it still feels weird to see a Sony flagship without it. We can live without 4K video as the 1080p clips are quite good on their own, but we would like to see Sony finally clean up its camera processing.

It seems that the smartphone industry is mostly innovating at the phablet level and phones made with single-handed operation in mind are falling behind in features and abilities. What was once a no-compromises segment has now shifted into upper-midrange territory.

Still, as far as Compact smartphones go, the Xperia X Compact is one of the best you can get.

Idk what those percentage meters are meant to convey but they can be really misleading when forming an opinion reading the review...

This is very beautiful and its so fast

Not sure if z3c is better than the x compact. Z3c good phone but x compact is as good/fast and has 32gb storage and fingerprint scanner. I got the x compact for £18 and part exed z3c against it. Bargain! Plus in my view x compact battery las...