The first rumors about the Xperia XZ3 came around to tell us a story of two cameras on the back, probably the ones that the Xperia XZ2 Premium uses but lately the latest intel refutes that. It seemed dubious at first but now that evidence is piling up that it is indeed the case.

Earlier we saw 360-degree render of the device missing the second camera on the back and now a benchmark listing shows that the phone will have an advanced single sensor on the back instead of two. The phone with model number H8416 has appeared on GFXBench featuring a camera with whopping 47MP resolution. 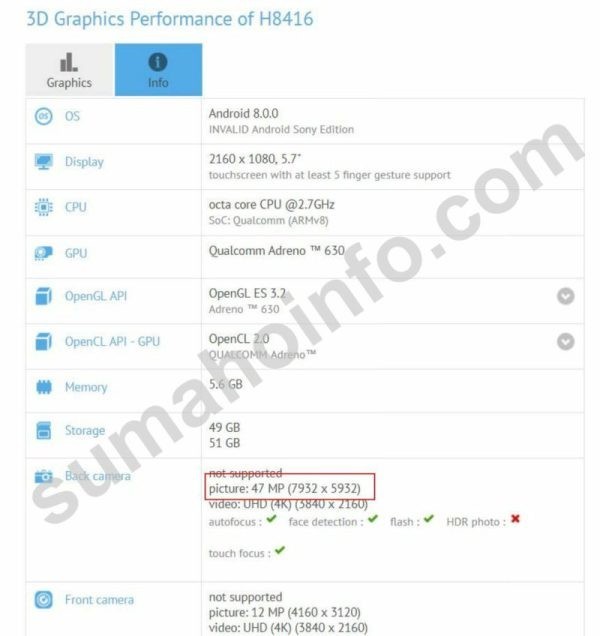 As most of you know, benchmark listings tend to have a little deviation from the actual specs but we're likely looking at the 48MP IMX586 sensor that Sony just unveiled. It has an even higher resolution than Huawei's 40MP sensor on the P20 Pro and uses the same Quad Bayer technology.

Then again we've seen the dual camera configuration in a live photo leak and even a photo of what seems to be the sensor setup. Ideally, Sony is preparing two devices instead of one, which would explain the contradicting reports.

A little over a month remains until the Sony August 30 event, when the confusion will be cleared.

Sony Xperia X and XZ-series get a minor update

what about the battery

i will buy this one release it now. even nokia will release also 40+ mp phones i will buy also. both of them i will buy it. sony and nokia has the best natural images.

You were giving your opinion as well , just that you weren't detailing how I was wrong. And you got your facts wrong even though you keep saying you're right.