Xiaomi Mi A2 arrives tomorrow in India for $255 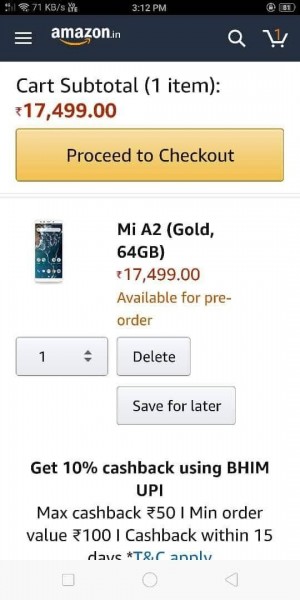 Xiaomi Mi A2 was unveiled in Spain last month. Following the announcement, the company VP Manu Kumar Jain said on Twitter that the phone will appear in India on August 8. After the device was teased as an Amazon Exclusive last week, now we know its price tag.

The Xiaomi Mi A2 is an Android One version of the Mi 6X for global markets. It comes with Snapdragon 660 and will be offered with Quick Charge 4.0 exclusively in India. The screenshot reveals the listed variant has 64 GB storage, meaning it has either 3 GB or 4 GB RAM.

Other specs of the phone include tall 5.99” LCD screen, AI-infused 12 MP + 20 MP dual camera setup on the back, both with f/1.8 apertures, coupled with an LED flash. It arrives with stock Android Oreo 8.1 out of the box and should be among the first phones to switch to Android Pie 9.0 that just got introduced.

Xiaomi Mi A2 hits India as an Amazon Exclusive

Say wut? Dude, your view doesn't make any sense. I never put the "OC" tag in my original comment. Neither did I use it for any monetary gains. It's like you're calling a person a "pirate" for saying iPhone X lacks Headphone jack XD Facts are facts,...

Lol. I never acted "almighty". I get that you are a fan of this phone or the brand, but this phone has a lot going against it than with it. It falls short as the successor to the Mi A1, which was one of the best (if not the best) mid range phone of i...