ZTE's nubia will introduce the Z40 Pro on February 25, and a week ahead of the event, the company took to Weibo to reveal the Z40 Pro's design.

The smartphone has a curved edge screen with a punch hole in the center for the selfie camera. And around the back is a camera island which reminds us of the vivo X70 Pro+.

The module houses LED flash and three cameras, including a Sony IMX787 sensor paired with a 35mm lens. It's the one in the center with a red-colored ring around it. The other two cameras come with ultrawide and telephoto lenses.

The Z40 Pro will come in at least two colors, and both have their power keys painted red. The power button doesn't have a fingerprint scanner embedded, but since the Z40 Pro is a flagship, we are likely to get an in-display solution. 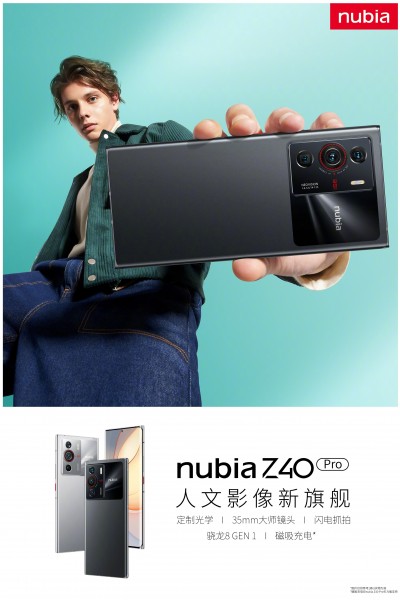 The poster also reveals that the Z40 Pro will have a metal build since it has antenna lines on all four sides of its frame.

nubia hasn't detailed the Z40 Pro's specs sheet yet, but the company previously confirmed that the smartphone will come with the Snapdragon 8 Gen 1 SoC, OIS, omni-directional autofocus, magnetic wireless charging, and a 300x better heat dissipation coefficient for sustained performance.

We expect nubia to reveal more about the Z40 Pro in the days leading to the February 25 event, which will begin at 2PM local time in China.

ZTE nubia Z40 pops up on Geekbench with 16GB of RAM

Maybe the European version of this model will be called Axon 40 Ultra will have an excellent telephoto periscope camera OIS + EIS and of course IP68 protection and of course Wireless charign 50W and maybe 150W charging, ....

I would buy a ZTE nubia flagship !